Head of the paladins and knights

Rhombus is the head paladin and head knight[1] of the Lost Hills chapter of the Brotherhood of Steel in Fallout.

A powerful presence wherever he appears, Rhombus is stern, stoic, and rather gruff. He has little tolerance for frivolity and is a very demanding teacher for those willing to learn. These qualities make him one of the finest warriors of the Brotherhood and an excellent Head Paladin.[2]

He ascended to this position after General Maxson II was killed in a skirmish with the Vipers. After John Maxson ascended to the position of high elder, Rhombus became head paladin. Although he was considered a bit stiff, he was nonetheless a hell of a soldier.[3] He personally led the vicious campaign of retaliation against the Vipers, breaking their strength and pushing them out of most of California, leading to full trade relations with the Hub after the month-long campaign concluded. Apart from his duties as a teacher, he also enforces the High Elder's wishes, by force, if necessary.[4]

After the death of John Maxson, Rhombus is a key figure in determining the course of the Brotherhood, establishing it as a major research and development house in New California, keeping it outside the political struggles of the region.[5]

If Rhombus were to die in 2161, his death is described as bringing about a "Steel Plague" that could last one thousand years.[6] However, this reality ultimately did not come to be.

Rhombus appears in Fallout as a talking head voiced by Clarence Brown. He also is a PC / NPC in Fallout: Brotherhood of Steel. He appears during the second chapter in the Church of the Lost torture chamber, where he and the Initiate mutually benefit one another. He becomes available to be controlled as a playable character in the third chapter. The latter Rhombus is voiced by John Vernon. He also is mentioned in the Fallout Bible.

"Possibly. When the invading army is vanquished, come back to be trained."

"Insolent pup. Apologize now and you'll not be hurt."

Rhombus in his office in Fallout 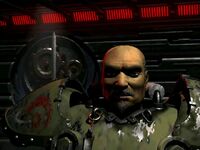 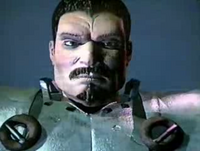