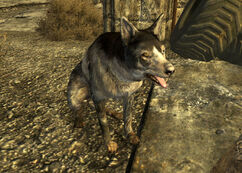 “As for the price for this favor, 700 caps sounds about right. Rey's like family, and I've got other dogs to take care of.”— Old Lady Gibson

Nothin' But a Hound Dog: The Courier may approach Old Lady Gibson about using Rey's brain in Rex. She will ask for 700 caps for this "favor" as he's like one of her family. She says he's getting old and he would probably need putting down soon anyway. The Courier can kill him for free with a Barter check of 70. After Rey has been killed, the Courier can use his brain for Rex. Using Rey's brain on Rex will increase Rex's ferocity in battle.

All of Old Lady Gibson's dogs are named by Spanish words. Rey translates to "king".

Retrieved from "https://fallout.fandom.com/wiki/Rey?oldid=3107548"
Community content is available under CC-BY-SA unless otherwise noted.