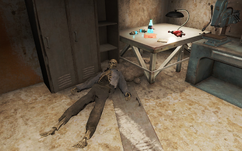 Lead scientist of the Beverageer Division

Rex Meacham was the lead scientist of the Beverageer Division before the Great War.

At some point, Rex and Kate Leavitt stayed at the Mountainside Bed & Breakfast for a time.[1]

Tired of dabbling with soft drinks, Meacham yearned to work on world-changing matters. When John-Caleb Bradberton (affectionately referred to by Meacham as J.C.) formed a partnership with General C. Braxton to develop chemical weapons, Meacham jumped at the opportunity. He and his team were provided with a cutting-edge laboratory built into the foundations of the Nuka-Cola bottling plant, with a dedicated reactor and living quarters. Work commenced immediately on the new Project Cobalt[2] with many initial failures. However, they eventually reached a breakthrough with sample Q4N7-UM - strontium-90.[3] Version 0.245 of Q4N7-UM was selected as the basis for further weapons development as a form of high-explosive nitroglycerin. Meacham named the substance Quantum, after its sample identification code, and presented his findings to Braxton and Bradberton. The former accepted it as the basis for the Nuka-nuke, the latter as a new flavor, Nuka-Cola Quantum.[4][5]

However, the project's military applications did not sit well with the best organic chemist on the team, Ruth Leavitt, who repeatedly voiced her concerns to Meacham,[6] who was her mentor and idol until he had the Beverageers research weapons of mass destruction. To appease her, Meacham placed Dr. Leavitt in charge of further developing the isotope behind Nuka-Cola Quantum.[7] However, as the Beverageers continued to focus on Project Cobalt, Leavitt refused to stay in Nuka-Cola's employ, openly confronting Meacham in early October and declaring her resignation.[8] When Bradberton learned of her intent from Meacham, he was furious, and used his connections to have Leavitt blacklisted from the industry.[9]

Meacham and his colleagues continued trying to convince Leavitt to join the project, Meacham resorting to intimidation, and kept trying until October 23, 2077. As the nuclear attack on the United States began, the automated safety systems engaged and the Beverageer lab locked down, leaving all four trapped within the facility.[10] Isolation and the end of the world as they knew it took its toll on the research team. Within a few weeks Edmund Medford committed suicide, hanging himself in the dorms, and Kevin Bennell tried to escape into his work to cover up the cracks in his composure. Meanwhile, relations between Leavitt and Meacham rapidly deteriorated. Meacham obsessed over Project Cobalt, convinced that its completion could somehow save America from the Chinese soldiers supposedly flooding the mainland. The result of his obsession was the shooting of Leavitt when she attempted to open the door out of the lab.[11] Outside, he was calm and collected. Inside, Meacham was falling apart, guilt eating away at his murder of a woman he secretly loved.[12]

Weeks passed as he and Bennell tinkered with Project Cobalt, trying to create a stable isotope for weaponization by non-existent troops above ground.[13] In October 2078, the last of his team finally cracked. Bennell made an escape through the reactor overflow pipe, preferring the risk of death from radioactive exposure to certain insanity. Meacham was psychotic at this point and opened fire on Bennell as he disappeared in the tunnel. Dr. Bennell died of his wounds at the service station in the tunnel, never having reached freedom. Meacham stayed behind, continuing his work and descending into lunacy. In the end, he finished the project but perished awaiting rescue by the military that no longer existed.[14]

His remains can still be found in the Nuka-Cola bottling plant's secret lab in 2287.

Rex Meacham appears only in the Fallout 4 add-on Nuka-World. He is also mentioned in Fallout 76.

Rex Meacham's name is an amalgamation of the names of Cal Meacham, the main character of the 1955 science fiction movie This Island Earth, and the actor that portrays him, Rex Reason. He shares this trait with his fellow secure beverageer scientists.

Retrieved from "https://fallout.fandom.com/wiki/Rex_Meacham?oldid=3321020"
Community content is available under CC-BY-SA unless otherwise noted.