Rex
“Second, he doesn't like hats, or the people wearing them. Don't ask, I have no idea why. Maybe because it rhymes with rats.”— The King on Rex

Mk. III Cyberhound, LEO Support Model, Serial no. B955883, known to the people of Freeside as Rex, is a cyberdog in Fallout: New Vegas under the ownership of the King.

Part German Shepherd, Rex is a "Cyber-Hound Mk III L.E.O. (Law Enforcement Officer) Support Model" that has been around since pre-War times. 209 years old, he was born as a regular dog[Non-canon 1] and served in the Denver Police Department. Sometime before the war, he was cybernetically enhanced and turned into a cyberdog - serial no. B955883. He survived the destruction of Denver and the harsh wastelands, eventually becoming Caesar's companion for a time, but was lost in battle.[1]

He later reached Freeside, where he came under the ownership of the King, who loves him dearly. Rex does not like rats, or hats, according to the King. The King says his dislike of hats may come from the fact that hat rhymes with rat.[2]

He is suffering from neural degeneration as a result of his aging brain.[3] As the process will result in his death without intervention, the King has contacted the Followers of the Apocalypse, to ask for help but they do not have the capabilities to perform brain surgery nor the knowledge of cybernetics that is needed. However, the Followers do know that a Doctor Henry in Jacobstown has this expertise and is likely Rex's best hope.[4]

Rex at the front of the King's School of Impersonation 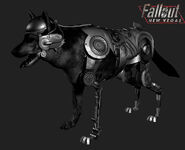