The Revere Beach station is a location in the Commonwealth in 2287.[1]

A pre-War MTA station, now serving as a fortress for a contingent of raiders.

The station contains two Protectrons that can be activated. The entrance area contains radroaches. Similar to the surrounding area above ground, the station itself is run by raiders. At the end of the station is a unique raider named Cinder. In the first large area is an Advanced terminal; hacking it will open a door to a small room containing Jet and a duffle bag.

When the area where Cinder is located has been cleared, there will be more raiders in the eastern train and platform areas. Upon exiting the eastern train, there is an Advanced-locked door on the right. Inside the cart in this locked room is an explosives box. Two more nearby doors, both chained and one trapped with a tripwire in front with grenades attached, reveal a room with four feral ghouls and a pack of duct tape, as well as several containers holding chems and junk items. There is a book return terminal in the lobby of the arcade building northeast of the station entrance.

Entrance on the right

Brahmin's skull with pool ball eyes, found in the kitchen 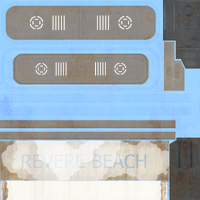