Revenge of the Geeks

“Who says accountants are wimps? Answer the questions or face the consequences.”

Revenge of the Geeks is a single-stage overseer quest in Fallout Shelter.

What appears to start as a simple scavenging quest for an individual from the player's dwellers swiftly becomes a test of the player's mathematical ability.

The player's dweller will require an initiate robe and over a day's travel time. After which, they will encounter a high level raider-like wastelander who will challenge them to answer 3 math questions.

The answers to each question, in order of appearance, are as follows:

Answering wrong at any stage turns the rogue quizzer hostile and a fight to the death will ensue.

This quest's name is a reference to the 1984 movie Revenge of the Nerds. 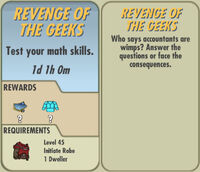 Rewards
Add a photo to this gallery
Retrieved from "https://fallout.fandom.com/wiki/Revenge_of_the_Geeks?oldid=3491077"
Community content is available under CC-BY-SA unless otherwise noted.