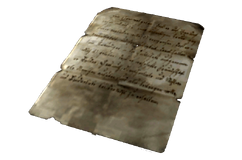 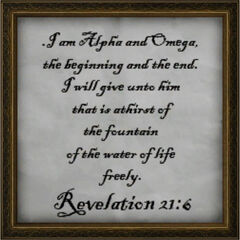 “Revelation 21:6. I am Alpha and Omega, the beginning and the end. I will give unto him that is athirst of the fountain of the water of life, freely.”— James

Revelation 21:6 is a passage in the New Testament of the Christian Bible. It is mentioned several times during the course of Fallout 3 by James, the Lone Wanderer's father, who says it was the favorite verse of Catherine, his deceased wife and mother of the Lone Wanderer.

The Greek letters alpha (A) and omega (Ω) are essentially the Greek counterparts of the Latin letters A and Z, meaning that God is the first and last of all things. They are also a recurring motif in Christian imagery and iconography.

As applied to the post-apocalyptic setting of Fallout, the introduction of 21:6 in the first tutorial quest can be seen as a foreshadowing of Project Purity, an attempt to purify all the irradiated water in the Tidal Basin by the Jefferson Memorial. After being reunited with James, the player learns that this passage was the inspiration for the project. In the game's climax, the code "216" is used to activate the water purifier.

It might also, depending on what path of Karma the player takes, be a prophecy of the Lone Wanderer's transformation into the new Wasteland Savior by his or her final act of self-sacrifice.

The "Better Days" holotape carries the implication that the Lone Wanderer was conceived during work on Project Purity, in the small clinic located in the Memorial's sub-basement. With the Lone Wanderer's sacrifice (if Broken Steel is not installed) to activate Project Purity, they were conceived, born and have died in the same location -- Alpha and Omega, the beginning and the end.

I am Alpha and Omega, the beginning and the end. I will give unto him that is athirst of the fountain of the water of life, freely.

Revelation in an endings slide
Add an image to this gallery

Retrieved from "https://fallout.fandom.com/wiki/Revelation_21:6?oldid=3053150"
Community content is available under CC-BY-SA unless otherwise noted.