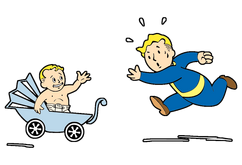 “But I think we've been talking long enough. We both know how this has to end. So... you ready?”— Kellogg

Reunions is a main story quest and achievement in Fallout 4.

Dogmeat finds the scent of Kellogg and leads the party out of Diamond City, stopping at a small pond to the south. There is another San Francisco Sunlights cigar that needs to be picked up and shown to Dogmeat to continue the search. He follows the trail along the railroad tracks, where mole rats and other creatures may be encountered. At the underpass, Dogmeat will stop in a doorway. On the railing next to the doorway there are signs of Kellogg's blood, showing the bloody rag to Dogmeat will continue the search.

The trail continues across a bridge to the remains of an assaultron that can be spoken to for more clues. Depending on which way Dogmeat leads the party through the forest, there is a possibility they will run into a deathclaw sleeping in a small cave. On the outskirts of Fort Hagen, there are bloodied bandages on a fence that are the next clue for Dogmeat to follow. Eventually, the trail leads to the entrance of the fort where the doorway has been blocked.

Enter Fort Hagen, either by a roof hatch or through an exit door in the underground parking lot. Inside the facility are numerous synths and automated turrets guarding the building. The energy weapons bobblehead can be found in the kitchens of the command center. Deep in the facility, Kellogg begins talking to the Sole Survivor via the building's intercom, advising them to turn back. Eventually, the Sole Survivor comes to an office with a sealed door where Kellogg concedes that the Sole Survivor will not leave and opens the door so they can talk. During the conversation, Kellogg will reveal that Shaun is being held by the Institute, and thus out of reach.

The conversation will end with both parties stating that the other must die and a fight breaks out (it's possible to skip the conversation entirely by killing Kellogg at a distance). After Kellogg and his synth bodyguards have been killed, a nearby terminal will reveal clues on where to continue the search for Shaun. The password for the terminal can be found on Kellogg's body, along with his cybernetic brain augmenter which is needed for the next quest, Dangerous Minds, and his unique gun, Kellogg's pistol. The terminal will unlock the security doors which leads to the exit. The doorway that led into this final area will be closed and remain locked once the battle with Kellogg is started, preventing backtracking into the fort. However, the exit elevator becomes available at the opposite end of the same hall.

There is a hidden bonus for this battle: Giving chems to Mama Murphy while Reunions is active will result in her sharing a vision of the Kellogg confrontation, which will give the player character a perk called "Foreknowledge," which causes a 25% reduction to all damage received from Kellogg during the battle.

Upon exiting the fort, a short scene plays where the Sole Survivor witnesses the Brotherhood of Steel arrive in the Commonwealth in full force, having traveled from the Capital Wasteland on board the Prydwen, which acts as their mobile base. Several Vertibirds will escort the Prydwen as it travels across the Commonwealth. The Brotherhood will announce their arrival via a loudspeaker and state that they are coming with peaceful intentions, but should not be interfered with. This starts the quest Reveille if one has not dealt with the Brotherhood before, or Shadow of Steel if they have.

Back at the Valentine Detective Agency, a conversation with Nick Valentine and Piper will complete the quest. If Nick was the player character's partner against Kellogg, after speaking with them, he will direct the Sole Survivor to talk to Piper at Publick Occurrences, where the next major quest of the main storyline will begin.

After this quest, Brotherhood of Steel troops and Vertibirds will start spawning across the Commonwealth, exploring, patrolling, and fighting raiders, super mutants, synths, and hostile wildlife.

The route from Diamond City to Fort Hagen
Add a photo to this gallery
Retrieved from "https://fallout.fandom.com/wiki/Reunions?oldid=3472217"
Community content is available under CC-BY-SA unless otherwise noted.