Broken Razor
“My name is Reuben Gill. I was one of the 50 people living in Vault 51 and... and the only one of us alive. I was the overseer of this Vault and the things I did to get that position I don't want to remember... But I can't ever... WON'T ever forget. This Vault was home to many wonderful people. Caring, loving people... and that computer just took them all away.”— Reuben Gill to whoever finds this vault

Reuben Gill, referred to as the Vault 51 overseer in-game, is the deceased overseer of Vault 51 found in the Forest region of Appalachia.

One of the several dwellers placed at Vault 51, Gill was in love with Helen Marks, a feeling that helped him survive the engineered crises and indignities, such as the one in mid-April 2078, when Harold Clark (an executive posing as Clayton Ward, a plumber) kicked him out of one of ZAX's luxury bedrooms to claim it as his own.[1] Reuben's cynicism differed from Helen's earnest belief in the human condition. This difference became apparent after they found the corpses of Carmen Greene, Matthew Johnston, Elizabeth Chambers, and Joel Chambers on August 3, 2078, and Reuben commented that at least their deaths meant "more food" for the rest of the dwellers, disgusting Helen.[2]

Helen was found dead on August 6, 2078. This drove Reuben Gill to go on a rampage and kill other residents, starting with those that he held grudges against, namely Harold Clark.[3] Gill killed at least three other dwellers[4] and was selected as overseer by ZAX after he was left the lone survivor of the ensuing chaos and violence in the vault.

For the next six years, Gill lived in the empty vault, constantly shadowed by ZAX. With nothing to do but subsist from day to day, he provided little useful feedback for the AI, which eventually rescinded his privileges and started locking him out of sections of the vault. Beginning May 20, 2084, overseers were given ranks in Vault 51 and Reuben, as a Rank 1 overseer, lacked privileges and special rations.[5] On March 3, 2094, ZAX locked Reuben out of his office, citing maintenance concerns.[6] ZAX ultimately removed Gill from his position as overseer on October 23, 2102, the same day Vault 76 opened. This marked the start of the process to select a new overseer and, as a resident of Vault 51, Reuben was required to participate in the process.[7]

Gill escaped the vault by stowing away in a large crate, which was dropped in Morgantown outside the Super-Duper Mart.[citation needed][8] By October 30, 2102, Gill attempted to return to Vault 51, specifically the Appalachian Shelters Claim Center, believing it to be a control center for the vault. Upon learning it was simply a marketing area, Gill attempted to hack back into the vault's network, in order to learn more about the network that automated the vault and get back inside.[9][10] Despite a heavy firewall and lack of clearance protecting the network, Gill continued in his efforts,[11][10] deciding to use the internal network of Mr. Clark, the Shelter Claim Center's Mister Handy, to contact the vault.[12] Gill meanwhile reflected on his and the other dwellers' time inside the vault, wondering if messages sent from inside ever made it out, still determined to hack into the network.[13]

By December 7, 2102, Gill finally hacked into the network, alerting ZAX.[14][15] He learned that the vault was not fully automated, which perturbed him.[16] After learning his network access attempt made Mr. Clark refer to him as "Mr. Candidate," in a manner reminding him of ZAX 1.3c, Gill decided to locate building supplies to construct turrets, as well as a beverage, if only to get far away from Vault 51 temporarily.[17]

Reuben's goal in both situations was to contact anyone from Vault 76 and seek their assistance in destroying ZAX. During this time, he successfully made contact with a Vault 76 dweller, and as he learned more about post-War Appalachia, it only reaffirmed his mission.[18][19] Gill's remains can be found in the isolated cabin.

Reuben Gill appears only in Fallout 76, introduced in the Wild Appalachia update. His story, along with Vault 51, was expanded upon in Nuclear Winter and Steel Dawn.

Corpse as of Steel Dawn 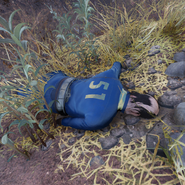 Location prior to Steel Dawn