Retrieve the FOB from the base Commander 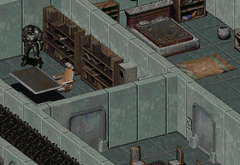 Get the tanker FOB from this locker

“Anyway, main base's in the middle of the goddamned ocean. Well, not smack ass in the middle, but it might as well be. Only way to get there is by ship or vertibird and the damn ship's been tinkered with. Ya need a FOB to operate the damn thing.”— Cookie

Retrieve the FOB from the base commander is a quest in Fallout 2.

The Tanker FOB is located in the locker in the base commander's office in the Navarro underground.

There are two ways to gain access without fighting:

Retrieved from "https://fallout.fandom.com/wiki/Retrieve_the_FOB_from_the_base_Commander?oldid=3418840"
Community content is available under CC-BY-SA unless otherwise noted.