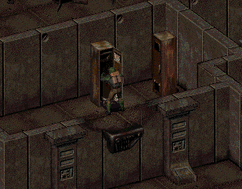 “We need some computer parts from our old base - Vault 15. Problem is there's squatters there who won't let anybody by. Somebody has to convince 'em to let us in - or just bring back the parts. Up for the job?”— President Tandi

Retrieve Parts/Gain Access to Vault 15 is a quest in Fallout 2.

The New California Republic needs some pre-War computer parts from Vault 15, from where they originated. However, some squatters have moved into the area directly over the vault and set up a small shanty town. For some reason they rejected any diplomatic talks with the NCR and denied them access to the vault, eventually, some of the republic's representatives stopped returning. President Tandi is looking for a specialist who can get the computer parts for the NCR, and possibly negotiate terms for the vault and the town above it to join the republic.

If the Chosen One speaks with Deputy Karl (located in the Police Station in Downtown NCR) about work opportunities he suggests getting an audience with President Tandi at the Hall of Congress, and that she is "looking for someone... resourceful." Tandi offers the Chosen One $500 for retrieving the needed computer parts from the ruins of Vault 15. This conversation is also an opportunity to find out more about the canon events of the Vault Dweller's adventures in Shady Sands as well as the present NCR, including getting the NCR history holodisk.

Once you travel to Vault 15, you will find out that the squatters are not very friendly. You can get access to the vault by either completing the Rescue Chrissy quest and gaining their trust or by simply killing their leader, Zeke, and looting the key-card from his body. If you rescue Chrissy, you will discover that the people living in the vault are actually a group of raiders, known as the New Khans, led by Darion. He and his men are seeking revenge on Tandi and using squatters as cover.

Vault 15 itself is to be accessed through an elevator door in the side of the rock wall just left of the building Chrissy was being held in (the main entrance in Zeke's house cannot be used, as he explains). Players may have missed the elevator on their first visit due to scattered trees and a coat of dust camouflaging the door. The computer parts will be on the 3rd floor in the 2nd room to the right with the lockers lining the walls. At this point you can return to Tandi and get the award. But to also get much more XP, loot and a good ending for both the NCR and the squatters you will have to kill Darion and persuade Zeke to let the vault be annexed by NCR.

To turn in this quest, it's enough to either get the parts or complete the deal. If you weren't mercantile when negotiating the job, Tandi would award you with $6000 instead of just $500. If you discovered Vault 13 before you return to her you have the option to tell her about your discovery. She will refuse to believe your story of talking deathclaws though and tell you to stop wasting her time. If, however, the deathclaws in Vault 13 are already dead, you can inform Tandi for a further bonus, but you must have visited and seen the playback. This amounts to $10000 no less ($20000 if you haggle with her; she'll be angry but pay up. Surprisingly, there's no penalty here).

Now, all that leaves is see Gunther to get the reward.

Once this quest is completed, Tandi will not talk to you anymore.

Retrieved from "https://fallout.fandom.com/wiki/Retrieve_Parts/Gain_Access_to_Vault_15?oldid=3032088"
Community content is available under CC-BY-SA unless otherwise noted.