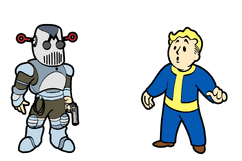 “Now you'll face the full might of the Mechanist, my righteous robots will end your tyranny once and for all!”— The Mechanist

Restoring Order is a quest and achievement/trophy in the Fallout 4 add-on Automatron.

The Sole Survivor is tasked with finding and stopping the Mechanist once and for all, so head to the RobCo sales & service center where The Mechanist's lair is hidden.

Once inside, the player character must use their robot, with an attached M-SAT, on several devices stuck to walls, to open the blastproof doors throughout the lair. After a lot of battling, the player character will finally make it into the Mechanist's war room. Inside, they will battle several waves of increasingly tough robots, the last one being a duelbot.

Alternatively, if the player character has collected all three supervisor holotapes and before going into the war room, the final battle with the waves of robots can be avoided. If going all the way back to near the beginning of the lair, where the first set of robots were fought, there is a decontamination corridor with a security room overlooking it. This room can be accessed either by a locked door on one side or a hole in the wall on the other. In this room is an elevator that is initially not working. Next to it on the wall is a Master-level locked "elevator access terminal" that can manually override the lockdown. After unlocking the terminal, then inserting each supervisor holotape and playing them, the three voice authorizations will override the lockdown and the elevator will work. At this point the player character can go up to the control room, surprise the Mechanist and a speech check will allow the player character to make the Mechanist stand down. (See notes below on where the holotapes are.)

Once the duelbot has been defeated, the power will fail and a speech check will allow the player character to make the Mechanist stand down. The dialogue here is timed, so if one waits too long to speak with the Mechanist, she will turn hostile. After explaining herself, she will remove her helmet, revealing herself to be Isabel Cruz.

She will then thank the Sole Survivor, before giving them her costume and walking away. She will usually also give the side quest Rogue Robot. Ada will also thank the player character, at which point the main storyline of Automatron is complete.

Retrieved from "https://fallout.fandom.com/wiki/Restoring_Order?oldid=3268663"
Community content is available under CC-BY-SA unless otherwise noted.