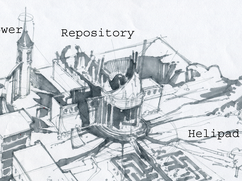 Restore power to the Nursery and all of its facilities but especially the Repository was going to be a quest in Van Buren, the canceled Fallout 3 by Black Isle Studios. It is located at the Nursery Repository.

Find the geo-thermal power plant and repair it. The second task involved in this area is the repairing of the reservoir floor. Unless this is done quickly the water in the closed system will drain away and everything will shut down again. In order to accomplish this, the player will need to have the water pumps in the spillway shut down. Once the water in the reservoir is empty a patch can be made to seal the crack.

The Hag snake infestation will give this area the needed combat opportunities to round it out. These creatures have formed a nest near the steam outlet in the condensation area of the cavern. They really like that humid sultry heat for their eggs (since they lack 'hosts'). The player will need to find their nest and destroy it.

The first task will be to shut down the water pumps. Some ways this can be done are:

The second task is to patch the hole. Some ways this can be done are:

There aren't any Journal Entries for this quest.

Retrieved from "https://fallout.fandom.com/wiki/Restore_power_to_the_Nursery_and_all_of_its_facilities_but_especially_the_Repository?oldid=1787494"
Community content is available under CC-BY-SA unless otherwise noted.