The Responders are a faction operating in Appalachia, consisting of a volunteer-based disaster relief organization. Formed shortly after the Great War by local first responder units, they were dedicated to helping local communities survive. To this end, they instituted a variety of programs that ranged from basic outdoor survival training to a specialized armed division called the Fire Breathers. Like the other regional factions, the original Responders were wiped out by the Scorched Plague.

Years later, those who reclaimed Appalachia began to reform the Responders, ranging from Heather Ellis in Flatwoods to the upcoming Responders group establishing itself in the Whitespring Resort.[2]

In the aftermath of the Great War, first responders in Appalachia mobilized to help their fellow citizens. Eventually becoming a unified group known as the "Responders", they encompassed government and crisis relief duties in Appalachia,[3] providing automated survival training to those who needed it.[4] Their goals included helping people who made it through the nuclear holocaust or were born after the dust had settled, as surviving in the post-War world became paramount. They set up numerous locations across West Virginia in a bid to establish some semblance of law and order.[5]

The West Virginian capital of Charleston became the heart of Appalachian reconstruction with the Responders at the forefront, the city itself showing great promise of rebuilding in the aftermath of the Great War.[6] Among these refugees desperate for help were those from the Pleasant Valley Ski Resort, far away in the Savage Divide; left without help, they banded together under one David Thorpe. Thorpe rallied them into what would be the first of the region's raider warbands - and what would soon be a major threat to the Responders' mission.[7]

Weathering post-War hardships, the Responders held steady, despite the new threat of the raiders. The city of Charleston grew with its success and proved to be a safe haven against raider attacks. However, that was to change by 2082; a raiding party led by Rosalynn Jeffries, David Thorpe's lover, was routed handily by the Responders, despite some casualties. Most importantly, some raiders were captured alive - Rosalynn among them. With a powerful bargaining chip, the Responders hoped that they could negotiate some sort of ceasefire in exchange for their prisoners. Thorpe, on the other hand, was convinced that Rosalynn was dead. In a sheer display of cruelty, on Christmas morning, the Summersville Dam was rigged with mini nukes on Thorpe's order. The subsequent destruction of the dam resulted in catastrophic flooding that killed countless Responders, refugees, and other innocents.[7] The survivors resettled at the Morgantown Airport.

Despite the devastation, the Responders did not give up. Morgantown proved to be a jackpot, as after containing the trouble with the local gangs, they had a centrally-located base, distance between them and the nearest raider clans in the mountains, and contact with the Free States and the Appalachian Brotherhood of Steel. They also expanded into Flatwoods[8] and began restarting some of the old infrastructures in the town to produce food and provide security.[9]

Their access to food, medicine, and other essential supplies was the foundation of their relationship with the Free States and the Brotherhood, with caravans crossing through the Savage Divide regularly. Four years after the flood, in January 2086, they reached the apex of their power and influence as they fought against the super mutants in Huntersville alongside power-armored troops of Paladin Taggerdy. The victory seemed to signal the beginning of a new era for Appalachia, as the Responders and Brotherhood forged an alliance and their patrols even managed to suppress the mountain raiders.[10] Sanjay Kumar and Miguel Caldera were indispensable for maintaining the fleet and keeping it operational.[11]

However, things would not go their way. The Enclave, hidden away from prying eyes, split apart in the civil war after President Thomas Eckhart decided to have his way and force the automated security systems to raise the DEFCON level by releasing scorchbeasts on Appalachia, after subjecting it to Chinese drones, the Huntersville mutants, and other monstrosities. The civil war that destroyed the faction set the scorchbeasts loose, which rapidly infested the Cranberry Bog and started spreading out into the adjacent areas. The appearance of the Scorched was a shock to all survivors who came into contact with them, as was the plague they spread. The Responders decided to fight back, organizing a special fighting force called the Fire Breathers using the experience of Melody Larkin and Hank Madigan, a Brotherhood deserter, to train and organize the elite fighters. They would face the horrors of the wasteland and protect the lands west of Appalachia from the Scorched, encountering strange hostile creatures along the way.[12]

However, the Responders failed to consider the big picture. Maria Chavez, their de facto leader, did not believe the threat was as severe as the Brotherhood made it out to be and disliked their militarism and repeated demands for supplies. What just a few years earlier promised to be a long-lasting alliance was unraveling fast, culminating on March 12, 2095, when the Brotherhood demanded information about Amy Kerry's project. At gunpoint. Although Chavez relented, the relations were soured permanently.[13] The fall of the Brotherhood in August 2095 left the Responders alone on the board and it was a matter of time until the scorchbeasts finally took them out. The raiders, desperately fleeing the Savage Divide, swept through the Forest, taking out many of the Responder outposts, including Flatwoods.

The research project into a Scorched vaccine at AVR Medical Center was launched too late to provide a cure in time to protect the Fire Breathers. By September 2096, all of the pieces were in place to create it, but communications breakdowns due to constant Scorched attacks prevented Dr. Hudson from completing it and the Fire Breathers were forced to launch their operation to seal the Big Bend Tunnel and buy time for Appalachia without it. The operation took place in late October and failed. So did Hank Madigan on his attempt to establish the Scorched Detection System developed in conjunction with the Free States, captured and killed by the raiders. Finally, Morgantown Airport fell after a desperate defense against hordes of scorchbeasts and their minions on November 7, 2096. The Responders were wiped out.[14]

By 2103, however, as people came back to Appalachia, Heather Ellis, who had returned with the Settlers, moved to Flatwoods, discovered the history of the Responders, and decided to revive the group and their efforts by becoming one herself, continuing to live in Flatwoods with her dog Chloe and wearing the Responders paramedic jumpsuit to show her support to revive the group. Another woman, Tiffany Brantley, decided to join the elite Fire Breathers and is with Vendor bot Mack and the firefighter Protectrons at the Charleston Fire Department, already suited up in her Fire Breather uniform, currently stuck on having to take the exam.

In the upcoming Expeditions: The Pitt, a new group of Responders reclaimed the Whitespring as a base of operations and refuge for Appalachia's newcomers. They managed to find and repair a vertibird, which allowed them to explore and help the regions outside of the Appalachian wasteland. One of the first groups they contacted were the Union, a group of survivors found in the ruins of Pittsburgh. Orlando and the managers of the Whitespring provided the Responders with Ultracite battery cells as fuel to fly the vertibird.

The Responders had a decentralized, horizontal structure designed to address the needs of people under their care and aid them in need. Regular supply trains were established between the nearby farms and the Responder headquarters, with full members assigned to their protection, such as Jerry Abernathy. For rapid response in emergencies, the Responders also established an emergency response team, trained by Felix O'Dell and consisting of Derek Castle (guard and escort), Veronica Chang and Kevin Trayjor (field medics).[15]

In the early years, Responders largely operated under their pre-existing chains of command (police, paramedics, firefighters, etc.), ignoring attempts by the Charleston Emergency Government to assert their leadership over them. However, this early structure was far from unified and required a good deal of tact and diplomacy to keep them from falling apart. This problem was exposed less than a year after the war, when the responders grappled with the problem of Chief Mayfield's heavy-handed rule of Morgantown. After he ordered his police officers to open fire on the rebellious VTU students and imposed a mandatory curfew, Melody Larkin realized that moving on him would risk splitting law enforcement Responders from the organization.[16]

After relocating operations to Morgantown Airport, the faction was effectively guided by five senior members: Maria Chavez (senior Responder and de facto leader), Claire Hudson (chief medical officer), Sanjay Kumar (chief engineer), Melody Larkin (combat trainer), and Jeff Nakamura (quartermaster). However, the division of labor was handled on a merit basis, with the senior Responders working together with junior members. The Fire Breathers combat unit was a notable exception, operating with a strict chain of command under Melody, as a matter of necessity.

Responders relied on volunteers, organized in a horizontal manner according to their area of expertise, bolstered by automated systems such as the Forest Watch.

Led by Melody Larkin, this division was assembled with the goal of exploring the Ash Heap sometime after the Responders had been formed.[17] They were based in the former Charleston Fire Department and made up of a mix of pre-War Charleston F.D. and post-War volunteers. Player characters can become Fire Breathers by undertaking the requisite exams during the quest Into the Fire.

Along with the primary Responder forces in Flatwoods, they provided medical services and helped in recruiting efforts before the Scorched overran Morgantown Airport. Their cosmetic uniform is rewarded upon the completion of the main questline in Flatwoods.

Their uniform is rewarded upon the completion of the main questline in Morgantown.

The original Brotherhood of Steel tried to recruit skilled Responders away to join the fledgling Appalachian chapter, with Hank Madigan eventually deserting the chapter for the Responders himself. The organization did not have the equipment or expertise that came with being a former military unit like the Brotherhood, as much of their equipment came from their origins as civilian emergency services, meaning members of that caliber were both needed and in short supply. Like the Brotherhood, the Responders fought against the encroaching Scorched, and also researched a means to develop a vaccine against the Scorched Plague, but their efforts ultimately fell short and they were wiped out sometime before Vault 76 opened. There is evidence of a Responders Radio station that operated prior to the group's destruction.[18][19]

The generic police uniform counts for purposes of the "Level up while wearing" challenge requiring a Responders uniform.

The Responders appear in Fallout 76.

Responders' map at the Morgantown Airport 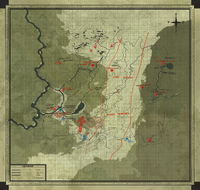 Full map of Responders territory during the Scorched Plague

Responder police officer's corpse inside the church in Flatwoods 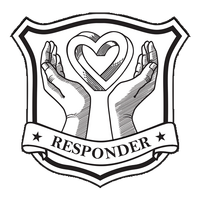 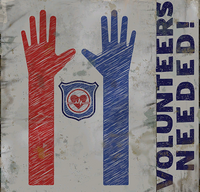