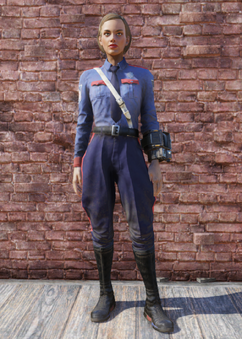 The Responder police uniform is an outfit in Fallout 76.

The outfit is one of the Responders outfit sets that can be obtained throughout Appalachia. The uniform consists of a blue shirt with red pocket flaps and red shoulder straps, a black tie and badge, black pants with red stripes and a black and white Sam Browne belt. The shirt also sports a Responders logo on the right shoulder and a U.S. flag on the left.

The US flag patch on the left shoulder is the old version with 50 stars instead of the newer 13 stars version.[1]

Worn by a male