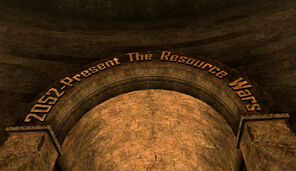 Great War
“In the 21st century, war was still waged over the resources that could be acquired. Only this time, the spoils of war were also its weapons: Petroleum and Uranium.”— Fallout intro

The Resource Wars refer to a series of conflicts brought on by an unsustainable global economy that heavily relied on finite resources such as petroleum and uranium.[1]

Several violent engagements took place, including the annexation of Canada by the United States and the Chinese invasion of Anchorage, Alaska.[2][3] European powers fought in the Middle East.[4] Once the Chinese were pushed from Alaska, United States forces were deployed to mainland China, where they experienced a stalemate.[5]

In the United States, anti-Communist propaganda was created which fueled paranoia.[6] The United States Army also commissioned the development of Liberty Prime, intended to be a superweapon.[7] Troops such as the 5th Infantry were stationed overseas on the island of Mambajao.[8] The nuclear threat was thought contained at the time, as an ideal nuclear first strike scenario (according to DIA intelligence at the time) would only succeed in destroying 41% of the American nuclear stockpile.[9] At Fort Strong, T-51 power armor was developed and subsequently shipped to China, where they were reported as effective in gaining troop surrenders.[10][11] Troops that had already completed their tours of duty were reployed.[12]

The Resource Wars ended by way of nuclear war, known as the Great War on October 23, 2077. High-yield nuclear missiles were shot from a submarine in the Boston area.[13] At 09:13 EST, the IONDS detected the first four missile launches and the United States went to DEFCON 2 and four minutes later, NORAD confirmed launches.[14] At 09:26 EST, the president ordered a retaliatory strike according to scenario MX-CN91 and the first nukes hit in Pennsylvania and New York at 09:42 EST.[14] By 09:47 EST, the facilities were offline.[14]

The Museum of History featured an exhibit titled, "2052 to Present The Resource Wars."

The Resource Wars are mentioned in the Fallout Bible.