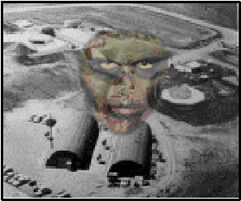 The Trading Post is pretty much the only local non-ghouls will ever see of the Reservation; that is, any free non-ghoul. The ten-foot outer wall is comprised of steel paneling from automobiles, tanks, helicopters, and whatever other metal siding the ghouls could find, and meshes into the surrounding jagged, rocky hills. It literally looks like a junkyard exploded to form this wall, but it is effective in keeping out undesirables, especially when the two gattling gun towers are taken into consideration.

Another natural (depends how you look at it, really) safeguard against intruders is the high level of radiation in the area. During the big war, several nuclear bombs fell within five miles of the Reservation, but never actually hit it. Because of this, the region still glows with radioactivity even after two-hundred years. Also, since this region is still highly radioactive, all non-ghouls visiting the Trading Post must either wear a radiation suit or be stocked to the gills with Rad-X and Rad-Away. Failure to do so will result in high doses of radiation, sickness, and death within a week.

If the gate guards deem the player worthy of trading (and most likely they will since they always seem to be interested in new folks who might have something interesting to offer, especially services), they will allow the player entrance into the Trading Post, but nowhere else. Upon entering, the player will see two beat-to-hell husks of what used to be Army supply trucks. Mended with spit and gum (some places literally), the cargo beds and tarps now serve as makeshift stores. The store to the north is run by a ghoul named Hank. Hank is a friendly enough ghoul who seems to be in complete social contrast to the surly ghoul guards at the gates and looming inside the Trading Post. Hank’s little shop specializes in weapons and ammo, and seems to have a very good supply of both. As it turns out, Hank is the master weapons smith of the Reservation and oversees all scavenging of materials, and manufacturing and forging. If Hank doesn’t have the conventional weapon the player wants, it might not exist anywhere else in the wasteland.

Hank is also accompanied by a human female dressed in a radiation suit who seems to be doing the brunt of the physical work. As it turns out, this female is Jillian McKinley, one of the escaped prisoners and current slave for Hank. It seems that Jillian was an exceptional mechanic and had a gift when dealing with guns and ammo. The ghouls were impressed with her abilities in this capacity and gave her to Hank. Hank eagerly accepted the help and quickly grew fond of Jillian. Over the course of a few months, this fondness turned into a crush, though he never made any advances on Jillian knowing that a beautiful, smooth skin woman would never shack up with a drippy, smelly ghoul (and he’d be right, in this case). However, Jillian does not mind working for Hank, as slavery goes, especially since the alternative was too horrible to imagine. This horrible alternative is something the player can investigate further, if he so chooses.

The store to the south is run by Betty, a female ghoul who has a way with armor, if not congeniality. She does not like humans and likes even less that she must deal with them in order to trade. In addition, her surly attitude is coupled with the fact that she has a crush on Hank. She might actually act on the crush, but his affection towards Jillian is so obvious that she just does not see the worth in trying. Normally she would just kill the human, but Jillian is Hank’s property and Betty would be kicked out of the Reservation if she did.

On the east side of the Trading Post is a large Army tent. This tent is used specifically for slave trading and is run by a very intimidating ghoul named Horatio. Before becoming a ghoul, it looks like Horatio must have been a very large athlete of some sort, something akin to a football middle lineman or professional wrestler. In either case, it looks like a lot of the size carried over to his present ghoul form. Horatio mainly stays inside the Army tent where he can watch over his newest slave acquisitions and bargain with the members of Caesar’s Legions, the main suppliers of the slaves. A large bargaining table rests on the south side of the tent, and along the eastern wall are two cabinets filled with Rad-X and Rad-Away, which will be used on the purchased slaves before taking them into the Reservation proper. At different times during the day, the north end of the tent is occupied by sickly slaves suffering from radiation exposure. Also at different times in the day, the slaves are taken through the heavily guarded Town Gate in the north, never to be seen again.

On the east side of the Main Courtyard are two weather beaten husks that used to be Army transport trucks. The canvas and metal cargo covers look like they have been patched more times than anyone but an obsessive-compulsive would care to count. These two trucks now serve as makeshift stores where two ghouls stand as proprietors. Hank, a non-threatening ghoul with a somewhat doom-and-gloom outlook on life, sells guns and ammo in the northern store, and Betty, a female ghoul, who’s serious to the point of being robotic, sells leather and metal armor in the southern store. Between the two, they share a human slave dressed in a radiation suit, named Jillian McKinley – one of the escaped prisoners.

On the east side of the Main Courtyard is a large Army tent, in relatively the same patchy condition as the Army trucks, which serves as the slave trading station. It is run by an unusually large ghoul, named Horatio. From the looks of Horatio, one could assume he was a large athlete of some kind in his smooth skin days. In addition to Horatio, there are several slaves tied up at any given hour of the day inside the tent. Accompanying the tied up slaves are usually two ghoul guards brandishing automatic rifles. The only furnishings are two cabinets stock full of Rad-X and Rad-Away. Outside traffic varies from different types of slave traders, but most, it would seem, come from Caesar's Legion. Evidently, Caesar’s Legions enjoy trading human slaves for firearms, armor, and ammo. The player can learn that the ghouls only buy humans; ghoul and super mutant slaves are not wanted.

Coming from the World Map, the player will first come across the Reservation’s Main Gate and wall. The Main Gate and wall are made up of welded car doors and sidings, combined with scrap metal sheets from what looks like aircraft (if the tiles set does not look exactly like this, no worries – this is more for “creative color"? and “artistic expression"?). The Main Gates are open inward during the daylight hours and closed at night. During the day, two well armed ghouls stand guard and question all incoming visitors to the Reservation Trading Post.

At the Main Gate, there are two Gatling Gun Towers. Each tower is stationed on the outside portion of the Main Gate, about twenty feet apart. Atop these twelve foot towers rests a hand crank Gatling gun and a ghoul ready to shoot anyone who steps out of line. The Gatling guns rotate a full 360 degrees, so no one is out of their range. Access to the towers is from ladders on the inside of the Main Gate wall. Should anyone be seen trying to climb these ladders, they will find out first hand how devastating a Gatling gun can be.

Also, there is an identical Gatling Gun Tower at the Reservation Town Gate, manned by a twitchy-fingered ghoul.

This gate and wall are almost identical to the Main Gate, except the Town Gate is a single steel door, some twenty feet across, that opens to the north. This gate is locked at all times and cannot be opened except by the direct authority of Willem Clark, the Reservation’s leader, or one of his top appointees. It is heavily guarded by four well equipped ghouls and a Gattling Gun Tower.

The Reservation Trading Post was supposed the appear in Van Buren, the canceled Fallout 3 by Black Isle Studios.

Retrieved from "https://fallout.fandom.com/wiki/Reservation_Trading_Post?oldid=2878900"
Community content is available under CC-BY-SA unless otherwise noted.