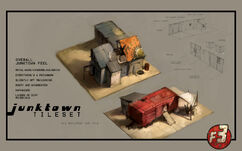 Some things get better with time; the Reservation Town is not one of those things. Upon entering through the homemade steel gate, it becomes apparent that the Reservation, though it missed most of the Big War and the after-effects, it did not miss all of it. The player character is immediately walking through chunks of debris that looks every bit the two-hundred years it is. The asphalt road that goes north and west is cracked, bleached from sand and sun, and full of potholes, some of them as big as a car. On this road can be found several abandoned husks of what were once fine quality jeeps, cars (with 50-foot wings, no less), and a couple of tanks here and there. With a bit of close examination, the player character can find that a lot of parts have been salvaged from these abandoned vehicles, but for what use, that’s a mystery – for now.

Going west, the player character will run into two helicopter hangars that are pretty much destroyed. There’s not much to look at here, except the careful scavenger might find some useful parts from the helicopter wreckages there. There are some ghouls living in the less exposed sections of the hangers, but for the most part, these are just big ruins.

To the east, after entering the town proper is a dilapidated office building. Several sections have caved in from either an old bomb blast or time – or both. However, in the offices that have not collapsed, several ghouls have taken up residence. All the ghouls here are very standoffish and will try to avoid conversation. All, that is, except for Florence, a very old ghoul who was old even when she was human before the bombs dropped. Florence was the disgruntled janitor for the office building, but the day the bombs fell she was in sub-level 1 cleaning a particularly stubborn commode. “Luckily for her, she survived the war but became even more cantankerous over the last couple of centuries. However, even though she is a fungus-grump, she is more than willing to chat the player character’s ear off (if she isn’t tempted to eat it). If the player character gained access to the town proper through sneaking, Florence is a good primary source for the player character to discover how to get into Sub-level 1.

The last stop for the player character is at the railroad cars, Main Access Elevator, and Equipment Lift. This area is heavily guarded by the ghouls and would represent quite the challenge for the sneaky player character type. In fact, sneaking into the elevator and using it is pretty much impossible without the guards noticing. If the player character gets captured, they will be brought before Measles and questioned, in which case, depending on how cooperative they are being, Measles will contact Dr. Willem Clark, via direct comm link, and consult. Negotiations can start from this point.

Based on either the negotiations or the player character’s actions within the Trading Post, there are several ways they can get authorized access to the sub-levels - which will be explored in more detail in the Quests section. But as a primer, a couple of ways is to foil a scam being placed on Horatio by a Caesar's Legion slave trader. Another way is to turn in Hank for being a dissenter. And another way is to seek out and kill a caravaner who managed to steal some shotguns, ammo, and a couple of human slaves. Bringing back his head and the loot will make Measles very pleased, who will, in turn, contact Willem Clark about the deed. Willem Clark finds it interesting that a human would care so much as to help ghouls, so he decides to meet with the player character. Measles will then escort the player character to Sub-Level 1 and introduce them to Willem Clark through the General Computer. Only a mouth appears in the computer monitor (obviously Willem’s), and the owner of the chewed up mouth will ask some questions of the player character. It is here that Willem will offer Measles as a companion and will give the player character access to Sub-Level 2, the level where all the ammo and arms are manufactured.

The Town Gate is a single steel door, some twenty feet across, that opens to the north. This gate is locked at all times and cannot be opened except by the direct authority of Willem Clark, the Reservation’s leader, or one of his top appointees. It is heavily guarded by four well-equipped ghouls and a Gatling Gun Tower.

Here are two medium-sized helicopter hangers. They are mostly caved in with sever char marks on the west side as a result of a nuclear explosion about a mile away during the big war. There is still a lot of concrete and rebar debris within the hangers, as well as scattered pieces of helicopters poking through. Some of the piles of debris look like they have been moved aside to reveal a helicopter or two, but the exposed choppers also look like they have been picked apart over a long period of time.

This one-story office building did not get the full brunt of the western nuke thanks to the two Helicopter Hangers. Still, a lot of the building has fallen, save for a handful of rooms and office spaces. In the rooms that did not collapse are ghouls eking out an existence. These ghouls are unwilling to talk to smooth skins since they came to the Reservation to avoid the smooth skins and their prejudices.

This asphalt road has seen better days. It is pock-marked, cracked, and uneven due to seismic activity over the years. During its heyday, it was used not only for automobiles but also for tanks and other heavy equipment. However, these days all it is used for is a graveyard for broken down and forgotten heavy equipment. Along the whole stretch of the street, burned-out husks of tanks, jeeps, and armored personnel carriers can be seen.

In the north-east section of the town are a bunch of fallout shanty-town shacks and tents. These are the living quarters of the rest of the top-side ghouls. Nothing fancy at all about these shacks; just cots, a few boxes used as furniture and maybe a chair for the privileged few.

At the center of this little shanty village is a very large tent, perhaps at one time an Army command tent. Inside, everything seems a bit nicer than anything that’s in the other shanty shacks. There is a normal bed that actually looks livable (as long as the person sleeping in it does not have a strong sense of smell), a rectangular meeting table that is in decent condition, and a couple of cabinets storing who-knows-what (or who). This is the residence of Colonel Green; a ghoul who used to be a ranking colonel at the Reservation when the bombs hit. Even after 200 years, Colonel Green still commands respect and authority among the other ghouls, and it looks like he has a small contingency of soldiers under his command. The player character will come to discover that Colonel Green is indeed in command of all the surface guards, including the five who hover around him during the day.

During the time before the big war, a railway went through the northernmost side of the Reservation. The railway was never on any public maps, and no one except the people who worked at the Reservation and top military brass knew about the railway. At the time, this railway was the best way to deliver and pick up large pieces of equipment and vast quantities of supplies. However, the railways went dead after the big war, and the two supply cars waiting on the tracks to be taken to another secret location would never move again.

That is until Willem Clark got creative and decided to build his own train engine. Using different components from the tank wreckages all over the surface of the Reservation, he and his fellow ghouls built an engine into one of the supply cars. Looking every bit like a Junkyard Wars concoction, the new train engine is functional. The only thing is, it has nowhere to go. But the plan is to eventually find someplace to go; a place that is a perceived threat to the Reservation. Upon the other supply car, Willem will mount his Nuclear Nellie howitzer gun and take it within thirty miles of its intended target. From there, it is his goal to fire a dirty bomb into his enemy’s base/town, which will hopefully cause enough havoc to collapse any organization that might have existed. But again, Willem still needs a destination. The railcars, the tracks, and the access gates are all kept in much better condition than the rest of the surface area of the Reservation.

The Equipment Lift is a large, steel platform elevator that goes directly to Sub_level3 and can only be operated from the 3rd sub-level. Both elevators are working and well maintained, however, the equipment lift needs a new cable in order to function – the engine works, just no cable for the actual lift.

Reservation Town was supposed to appear in Van Buren, the canceled Fallout 3 by Black Isle Studios.

Retrieved from "https://fallout.fandom.com/wiki/Reservation_Town?oldid=3325293"
Community content is available under CC-BY-SA unless otherwise noted.