The research lab is a section of Mothership Zeta.

At first glance, the research lab appears to be where the aliens analyze Earth's vehicular technology. Displays of cars, motorcycles, and Colonel Hartigan's space pod. Deeper in the labs however, one discovers a warehouse-scale collection of Giddyup Buttercups and related memorabilia in various states of storage. It appears that the aliens are fascinated with the pre-War toy. One room houses a lone Giddyup Buttercup surrounded by dead test subjects with observation rooms on either side. When you enter the room the lone Giddyup's eyes will flash blue three times. A workbench can be found with a disassembled Buttercup and some pulse grenades.

The research lab consists of two large main areas that are connected by a hallway. Upon entering, the player finds themselves in the vehicular research area. This area contains a single large room with various vehicles and mechanical devices. The hallway leading to the Giddyup Buttercup research area is immediately south from the entrance to this room.

The Giddyup Buttercup research area has two levels and is comprised of a large room with three connected smaller rooms. The southernmost room in this area contains a teleportation matrix that the player can activate in order to return to the cargo hold.

In the first section (vehicular study) you will find:

In the second section (Buttercup warehouse):

Research lab appears only in the Fallout 3 add-on Mothership Zeta. 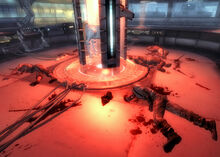 Test subject
Add an image to this gallery
Retrieved from "https://fallout.fandom.com/wiki/Research_lab?oldid=3233761"
Community content is available under CC-BY-SA unless otherwise noted.