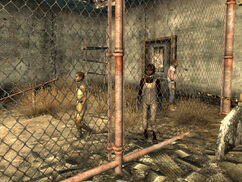 “Them and Penny got themselves caught by mungos, just like you. Slavers from Paradise Falls. I told them to watch out, but the stupid kids didn't listen.”— Mayor MacCready, when asked about the kids who got caught.

Rescue from Paradise is a side quest in Fallout 3. It is also an Xbox 360/PC achievement and a PlayStation 3 trophy. Depending on perk choices and Speech successes, one may need to complete this quest to advance the game's main quest line.

When inside Paradise Falls, one will have to go to the slave cage at the back of the area and talk to the kids through the wire gate (or kill Carter before his slave collar is activated and talk to Sammy nearby, thus starting the quest; however, killing Carter turns the slavers hostile). Squirrel tells the Lone Wanderer that they must get his computer terminal reconnected to the network so he can deactivate their slave collars and open the gates. This can be accomplished either by tampering with the terminal in Eulogy's pad (requires 50 science) or rewiring a cable junction box near the bar (the area with the sign labeled "Food") (requires Repair 40). Once this is completed, Squirrel then advises that the guard Forty needs to be distracted so they can make a run for it. The player character has the option of

Once this is completed, Squirrel will tell the Wanderer that their friend, Penny, won't leave until her friend, Rory, is released from The Box. (Note that if one killed the slavers to allow the kids to escape, Rory will have died in the box and this Speech option will be unavailable.) However, it is also possible to convince Sammy and Squirrel to abandon her if the player character's Speech is high enough. (This act grants negative Karma.) One can meet the kids outside at this point and finish the quest for full XP (900) and positive Karma. One may also wish to pass a Speech check to tell Penny to leave without him (75% chance at speech skill 100); or if they have the Child at Heart perk, convince Penny to leave Rory there without any Karma loss. At this stage, the player character can lie to Penny and tell her Rory is safe, tell her that "friends leave you sometimes," or find the key to The Box and save Rory. Penny advises that Forty can be pickpocketed for the key, or one can find it in Eulogy's Pad; it is also possible to pickpocket it from Eulogy Jones. Once the key has been retrieved, save Rory and tell her he made it out, or if he died, tell her that he died with no Karma loss.

Once The Box is opened, one will notice that Rory is not a child and realize that he won't fit through the sewer pipe drainage grate like Penny, Sammy, and Squirrel. One will need to sneak him out through the front door.

You don't have to get Rory out of the town. You can get him out of The Box, tell him to follow you, immediately go back to Penny and tell her you've rescued him. As he tries to escape, he will die, but Penny will be rescued.

It's possible to "rescue" Rory without turning the town hostile, as long as he does all the fighting. First, steal the ammunition (including grenades) from all the outdoor slavers, and collect all the melee weapons lying around. Note that ammunition is respawned on the slavers, named and unnamed alike, after 72 in-game hours. Next, you will have to give Rory a weapon and ammunition. He is hopeless with energy weapons, but can handle a combat shotgun rather well. You will have to plant (reverse-pickpocket) it on him, and he will turn hostile if he catches you. He can use stimpaks as well, so plant a couple on him. Don't give him anything too rare or expensive, as you will likely not be able to retrieve it. Now, when you tell Rory to run, he will be armed and the slavers will not. This gives him a fighting chance, although he still tends to freeze up and get beaten to death. Once he reaches the door to the outside, he is home free; Grouse and the other outdoor guard will not attack him. However, you should be aware that Ymir and Jotun are armed with super sledges and can easily kill Rory. This is why it is recommended to sneak Rory out at night, so that many of the slavers will be asleep.

It is possible to simply sneak Rory out of the town with no fighting if timed correctly. At dusk many of the slavers will head for their beds, and if Forty is still away from his post, you will be able to sneak right through the town and leave by the front door without any fighting.

Another method is the "running of the bulls" strategy, where you get to Rory to follow you, and release the other three prisoners willing to escape from the pen simultaneously. With luck, you and Rory can make it to the gate while the other prisoners take the brunt of the enemy fire. This can be used in conjunction with looting of the slavers of their ammunition.

If you're interested in actually saving Rory through cleansing the town, it is necessary to release him from The Box before killing all of the slavers, or else, when you open The Box, he will be dead, though intact. The best method seems to be to free him at midnight from The Box, lead him to the far back corner of the now open children's pen once they have run away, and have him wait there while you destroy the slavers of Paradise Falls. (Even having him wait in the open Box seems to work fairly well.) Then, simply lead him to the gate. There will be about 10 slavers awake at that time of night, depending on the difficulty level, and this will obviously turn the city hostile towards the player. It does not appear to be necessary to kill the two guards at the entrance to Paradise Falls, as Rory talks to you at the town exit, at the end of which you gain Karma.

As an alternative to those strategies which require you to kill the slavers of Paradise Falls and to those strategies which just leave Rory there, there is a third option. Once you have opened the Box and gone through the initial dialogue, simply tell him that he's "on his own" or something to that effect. He'll be upset and start running toward the exit on his own rather than following you there. Immediately bring up the "Wait" feature. Wait about an hour or two, and he'll be transported out of Paradise Falls. The slavers will still be acting as they were. The key to making sure this works is ensuring that you "Wait" before Rory can enter into any sort of combat. You miss out on the Karma for personally escorting him to the door, but he will still show up at Moriarty's. This technique can also be used to assist the slaves you may have captured during Strictly Business without murdering the slavers, as well.

There is no reward besides Karma for saving Rory. He gains no new dialogue in his new home in Moriarty's Saloon.

If you have enough bottle caps and a high enough Speech skill, you can simply buy the children from Eulogy Jones. He demands 500 bottle caps each for Sammy and Penny, and 1000 bottle caps for Squirrel. However, with a successful Speech challenge, you can buy all three children for 1200 bottle caps total. You can then meet the children at the front gate to Paradise Falls and simply escort them outside. Speaking with Sammy will successfully end the quest. However, completing it in this method will not allow Rory to escape.

Shooting all of the slavers will complete the quest. It's a rather messy way to do it, but it works. Note that if you kill the three guards standing in front (Grouse, the random slaver, and Forty) the first time you encounter Paradise Falls, Sammy will not go inside and return to the cage but remain by the burnt-out car next to the gate. Only Squirrel and Penny will be waiting for you at the grate exit; Sammy will make his own way back to Little Lamplight without the need for any interaction with you.

Retrieved from "https://fallout.fandom.com/wiki/Rescue_from_Paradise?oldid=3187832"
Community content is available under CC-BY-SA unless otherwise noted.
... more about "Rescue from Paradise"
RDF feed
Has platform
Xbox 360 +  and PC +