8h
“While we were spreading Christmas cheer, someone managed to track down Santa Claus. He's in trouble. Let's go!”

Rescue Santa! is an overseer quest and the final part of the Vault-Tec Saves Christmas! multi-stage questline in Fallout Shelter.

This quest takes place in a vault with a random layout with around six levels. Enemies can include radroaches in groups of three to five, ghouls in groups of three, mole rats in groups of three, radscorpions in pairs, and deathclaws in pairs. However, as with most festive quest maps, they are of comparatively low level even compared to the requirements. Near the bottom of the vault, Santa can be spoken to. A choice is given between a random legendary weapon, a random legendary outfit, a Giddyup Buttercup, or no additional reward. Regardless of what is chosen, an original Santa suit is rewarded. The room Santa is in also contains a rare outfit, rare junk, and rare weapon. 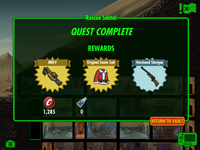