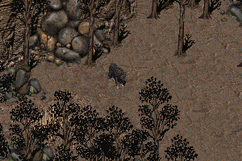 “Smoke ran off into the hunting grounds and hasn't come back and now Morlis won't let me go find him. She says it's too dangerous and he's just a dog, but I was going to go anyway. But now you're here and you could do it and I wouldn't get in trouble.”— Nagor

Rescue Nagor's dog, Smoke, from the wilds is a quest in Fallout 2.

This quest is given you to by Nagor in Arroyo. He asks you to locate his missing dog, Smoke. The dog can be found in the Arroyo hunting grounds.

Once you've found the dog he will follow you out of the hunting grounds. If you get into a fight with any of the geckos in the area, the dog will attack the enemies alongside you, at the risk of being killed. If the dog dies, the quest cannot be completed.

If you refuse the quest, Nagor will try to rescue Smoke himself, but will be killed. You will lose 3 Karma if you do this. The quest will also become impossible to finish (Smoke disappears).

Smoke only spawns at the hunting grounds after taking the quest.

Retrieved from "https://fallout.fandom.com/wiki/Rescue_Nagor%27s_dog,_Smoke,_from_the_wilds?oldid=3111113"
Community content is available under CC-BY-SA unless otherwise noted.