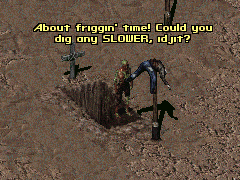 Rescue Coffin Willie is an unmarked quest in Fallout 2.

“Had it not been enough being shunned by Vault City and generally, ghouls have this marked tendency to be mistaken for corpses while they are sleeping. Someone who rescued Woody in the Den from his dubious role as a sideshow exhibit: "Show..Me..The..Mummy!!" may consider doing a good turn for Lenny's father, also, and digging him out of his untimely resting place in Golgotha.”

Quest is given by Lenny at Gecko. Here he asks the Chosen One to dig up his father, Coffin Willie, from his grave at Golgotha.

The location of the grave is at the northwest (top left) corner of the southern (bottom) section. The grave is easily distinguished from others by looking at the grave mark; It says: "Here lies the dumbest son of a bitch to ever set foot to New Reno."

Little is received for this other than, potentially, satisfaction, and the chance to see Coffin Willie's comments as he lurches away, muttering to himself. Clicking on him makes him spout them randomly. Unlike Vic's daughter, Willie has nothing to say to his son.

Retrieved from "https://fallout.fandom.com/wiki/Rescue_Coffin_Willie?oldid=3144135"
Community content is available under CC-BY-SA unless otherwise noted.