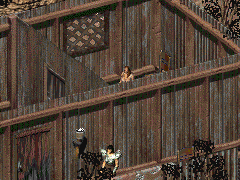 “She doesn't cause trouble, she's always home on time and she's shown herself to be a very responsible young lady. I let her do as she pleases most of the time. Last week Chrissy didn't come home. I've asked around, and nobody's seen or heard from her.”— Rebecca

Rescue Chrissy is a quest in Fallout 2.

The quest starts after the player character talks to Chrissy's mother in the Vault 15 squat. After exiting dialogue, follow the rocky path that leads to the green exit grid and talk to Dalia. Pass the Speech skill check or kill Dalia to get by her. Next encounter two raiders. One in front of the shack and another inside. Karla, the woman inside is equipped with a sniper. High Speech will enable Chrissy to be free without firing a bullet; alternatively, gun the raiders down. Be warned though, as the door to the room holding Chrissy is trapped, while one of the raiders, Phil, holds a key to it. High Sneak and Lockpick skills make the way around the shack to back door without that key and dialogue with Phil a viable option.

After Chrissy is free, talk to her in her mother's tent to be rewarded with the ability to speak to Zeke, the "leader" of the squatters, who will give you the keycard for Vault 15.

While speaking with Phil outside the building, one can barter with him and take his weapon.

Retrieved from "https://fallout.fandom.com/wiki/Rescue_Chrissy?oldid=3352986"
Community content is available under CC-BY-SA unless otherwise noted.