Repulsion devices are technological security devices used to prevent a person from entering a specific area, confine captives to a particular zone or make a person unable to perform a specific action. There are several types of repulsion devices like laser tripwires and pulse fields, but the most commonly used and the most famous is the force field.

Force fields are photonic resonance barriers creating a wall of energy. They have many applications and varying degrees of strength and can either completely block a passage or injure a person passing through. However, most force fields are non-lethal. Generally, solid objects cannot pass through it.

The most common pre-War and post-War force fields. They are powered by a separate power source and can usually be disabled with an accessible mean.

The principal force fields used in New California. It has a yellow color and is powered by an emitter positioned to the left. It is impossible to pass through it without disabling it first. Yellow force fields may be temporarily disabled by tinkering with the force field emitter.

This force field is similar to the yellow field, but bears the important distinction of being permeable - a person can pass through it but will sustain a small amount of damage, depending on their armor.

This version can be encountered in the NCR. It uses 4 pairs of emitters that are aimed parallel to the ground, creating 4 orange bars. This kind of force field is impassable. 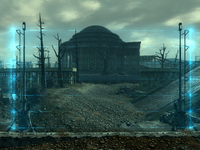 An advanced force field referred to by Liberty Prime as a "photonic resonance barrier", mostly used by the Enclave after 2241. It has a blue color and is powered by two large transportable generators, one on either side of the path. These generate the blue force field between the two pylon generators and have an increased width and the size than a standard force field. It is possible to create a large barrier by combining several blue force fields between them. Generators cannot be destroyed and it is impossible to pass through them.

Forcefields used to protect sections of Raven Rock and the mobile base crawler can be bypassed using nearby terminals, although doing so requires a high (80) science skill. They can also be damaged with the Explosives skill (50), allowing access but at the cost of slight health damage when passing through the field. Smashing the panel has a similar effect.

A rare force field and one of the two types used by aliens. They are powered by several beams embedded in the margins of entry and they cannot be moved.

A force field only used in Vault City and the Enclave Oil Rig, possibly a refinement of the force field used elsewhere in New California. It has a yellow color and is used in captive areas as a door. It is impossible to pass through it without disabling it first. They can be disabled through nearby terminals. 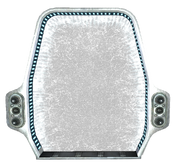 The principal force field of aliens. It has a white color and is used in captive areas as a door. It is impossible to pass through it without disabling it first. They can be disabled by using nearby terminals or buttons.

Big MT has developed several versions of force field based on the blue photonic resonance force field. However, they were created in a different frequency than other and a sonic emitter upgraded with the X-8 vertebrae-pulse-de-sensitizer frequency can easily disable them.

The standard force field used in Big MT, created by several beams inserted in a structure. It is possible to create a large barrier by combining several blue force field between them.

A container equipped with a blue force field. 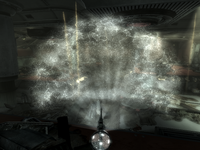 A deployable force field used by aliens that protects against ballistic and energy weapon fire, and which also inhibit the movement of people. It can be deactivated by destroying the projection unit behind the force field.

An electromagnetic pulse grid used by the Chinese to protect their base of operations in the Anchorage Reclamation simulation. It paralyzes the circuits of every electronic device crossing it, including power armor, causing irreversibly fatal damage and the wearer to suffer a massive electrocution through powerful electromagnetic pulses (powerful EMP has minimal effects on biological systems but the wearer here is linked to their power armor). It can be disabled by a controlled computer terminal near it.

A unique field used in Big MT at The Think Tank dome. It prevents any lobotomite from accessing the aggression center in their brain and rendering them unable to attack.

“The RADAR FENCE protects us all! If evidence is correct, the one who built it - is ME! It keeps anything with a disembodied brain INSIDE - like US - and anything without a brain... also INSIDE! It is the ULTIMATE DEFENSE against Communist aggression. There'll be no infectious ideas on MY watch!-”— Doctor Borous

The radar fence is a kind of radar-guided repulsive field around the perimeter of Big MT. Erected by Doctor Mobius, potentially from schematics created by Doctor Borous, to prevent the think tanks from escaping into the wasteland, it keeps the Courier from leaving the Big MT until they finish the Old World Blues main questline.

A protective barrier utilizing red laser beams is commonly used in many places in Appalachia.

Ad in Vault 79
Add a photo to this gallery

A specialized and unnamed device applied to the Bysshe Company's imposter Sheepsquatch. It projects a normally invisible barrier around the robot which protects it from the vast majority of attacks but can be rendered inert through the constant application of extremely high voltages. When disabled, it is seen producing a large, white pulse of energy that knocks back nearby objects.

A unique field implanted in the Secret Vault.

Force fields in Fallout 3 can mostly be disabled using nearby terminals with 75 or 100 Science.

Retrieved from "https://fallout.fandom.com/wiki/Repulsion_device?oldid=3421003"
Community content is available under CC-BY-SA unless otherwise noted.