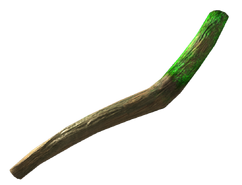 “It'll be easy. One tap with the applicator, and it overwhelms their senses with a sort of "feel-bad" sensation. Then they're gone before you know it!”— Moira Brown on the repellent stick

The repellent stick is a unique melee weapon in Fallout 3.

The repellent stick is a simple wooden stick with "mole rat repellent" (a combination of jet and psycho) on it. The stick is exceptionally effective against mole rats, as one hit causes an allergic reaction on mole rats, causing their bodies to smoke and their heads to explode after five seconds, while a second hit will cause the explosion to happen instantly. Do not be fooled by what Moira says when the Lone Wanderer first gets the stick, as it's an experiment gone wrong.

If used on any creature other than a mole rat, it will still cause the "smoking" effect, though it won't cause them to explode.

Due to its very low base damage, the repellent stick can successfully strike about 2000 times from full condition before breaking.

This item is obtained from Moira Brown at Craterside Supply in Megaton during the quest Wasteland Survival Guide.

Retrieved from "https://fallout.fandom.com/wiki/Repellent_stick?oldid=2272283"
Community content is available under CC-BY-SA unless otherwise noted.