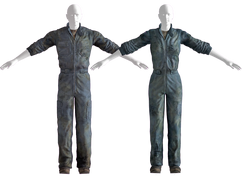 Repairman jumpsuits are pieces of clothing in Fallout 3 and Fallout: New Vegas

Added to Fallout 3 with the add-on Operation: Anchorage, the green army mechanic jumpsuit is used by American grease-monkeys (U.S. Army mechanics) in the Anchorage Reclamation simulation while repairing power armor and vehicles.

It is available to the player only through the use of console commands or glitches.

Unlike most armor and weapons in Operation: Anchorage, the jumpsuit does not have an extremely high HP count, and will degrade normally.

The Red Racer jumpsuit is a basic yellow jumpsuit with a red Red Racer logo on its back.

Jenny Stahl and Lucky Harith both wear this clothing. It is also used by some vendors. It cannot be found at the Red Racer factory, but can be purchased from Bannon and Seagrave Holmes in Rivet City. A single suit can be found at the Lil' Tyke Playhouse in Point Lookout, and one can also be found aboard Mothership Zeta, in the cryo lab.

The RobCo jumpsuit is a basic blue jumpsuit with the RobCo logo in silver-gray letters on the back.

In Fallout 3, three can be found on the ground floor of the RobCo facility, another one in the Rivet City market and 6 are worn by non-player characters (Walter, Moira Brown, Henry Young, Winthrop, Daniel Agincourt, and Bill Foster). Another one is worn by The Mechanist should you convince him to give up his career in The Superhuman Gambit. In Fallout: New Vegas one is worn by non-player character Dermot who can be found in Westside either in his room at Casa Madrid Apartments or outside to the east of Westside Co-op.

The handyman jumpsuit is tinted red and can only be repaired with the Red Racer variant.
Although only obtainable via console commands in Fallout 3, a version of this jumpsuit is added in the Point Lookout add-on, worn by the weapons dealer Haley. The Point Lookout version will repeatedly give the +5 bonus each time the area is reloaded, allowing for a non-player character's repair skill to be maxed out at 100.
In Fallout: New Vegas it can be found in power plant 01 at Hoover Dam worn by Mike Lawson, at Michael Angelo's workshop worn by Kate and at the Aerotech Office Park worn by Keith.

The Yangtze camp jumpsuit is a unique jumpsuit that only appears in the Fallout: New Vegas add-on Old World Blues.

Concept art by Liquid Development
Add a photo to this gallery
Retrieved from "https://fallout.fandom.com/wiki/Repairman_jumpsuit?oldid=3489418"
Community content is available under CC-BY-SA unless otherwise noted.