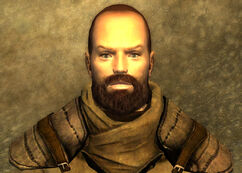 West of Techatticup mine

Private Renolds is an NCR trooper on a road west of Techatticup mine in 2281.

Renolds and his squad were recently ambushed by Caesar's Legion and taken captive in the mine farther down the road. Renolds was able to escape but two of his fellow troopers remain in captivity. He states that "bastard Alexus" is responsible for the ambush.

If the player character rescues the hostages before talking to Renolds, they can respond to his request by saying, "were they the hostages in the mine?" This will garner surprise and appreciation from him.

Retrieved from "https://fallout.fandom.com/wiki/Renolds?oldid=3234354"
Community content is available under CC-BY-SA unless otherwise noted.