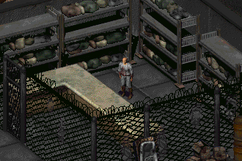 “…another postnatally-aborted wreck in a post-holocaust world replete with idiot man-children. (Raises his fists.) Out of my shop! Get out at once! Don't you come back, you hear?!”— Renesco reacting to a stupid Chosen One.

Renesco "the Rocketman"[1] is the proprietor of the eponymous Renesco's Pharmacy in New Reno in 2241 in Fallout 2.

An old man with a pair of huge, garish glasses with one good lens,[2] Renesco is one of the most intelligent and capable scientists in New Reno, putting his skills to use as a chemist developing and distributing a large variety of drugs, recreational and otherwise, from his pharmacy in the Commercial Row. He is a firm believer in natural selection and personal responsibility, feeling not a millimeter of pity for the drug addicts that buy his products, as they know full well what they are buying.

Renesco's education and impressive vocabulary (typically employed as heavy duty verbal artillery against clients, particularly if they are annoying) make him stand out among the ranks of Reno townsfolk, though nobody knows where Renesco came from. He himself rebuffs all attempts at learning that fact by pointing out that asking people about their past in Reno is not a smart move. Vault City could be one of the places he learned his trade, though it seems unlikely given his attitude and knowledge.

Although it would appear he is making a living in a neutral zone, Renesco is actually the employee of the Salvatores. They own his establishment and extract a heavy tribute from his operations, collections wiping his purse regularly. They also use him to fulfill various special requests, such as preparing Jet laced with radscorpion venom. Renesco knows he has no choice, as if he refuses, they will simply kill him and find a more pliable chemist.

Renesco appears only in Fallout 2.

Retrieved from "https://fallout.fandom.com/wiki/Renesco?oldid=3489948"
Community content is available under CC-BY-SA unless otherwise noted.