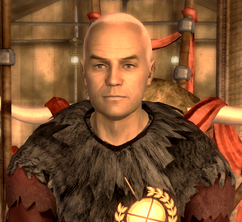 Aid Caesar in gaining power over the NCR

“There are rewards for doing as I command. Today, your reward is vengeance. You get to decide how Benny dies.”— Caesar

Render Unto Caesar is a main quest in Fallout: New Vegas.

Matthew 22:21 of the Bible instructs those to "render unto Caesar the things that are Caesar's"; as Caesar sees it, the Mojave shall be rendered unto him after he allies with or destroys certain tribes around New Vegas.

Upon arriving at Caesar's camp, the player character will have their weapons removed (with the option to keep holdout weapons). All weapons will be returned upon leaving the camp. With a Speech skill of 35, the player character can ask what items are banned, and keep aid/chems, saying they suffer from a heart problem.

Travel up the hill and enter through the gate to the inner area of the Fort. Here one will find the Legion arena and, most notably, Caesar's tent. Enter Caesar's tent and talk to him. Caesar will tell the Courier that he has heard a lot about them and will talk about what they have done depending on the Courier's past decisions, he will then tell the Courier that there is a vault underneath the camp with the markings of the Lucky 38 Casino. He asks the player to enter the vault and destroy it. He then returns the platinum chip.

The vault is located within a concrete bunker behind Caesar's tent. Upon entering, a Legionary will return all of one's confiscated items. Putting the platinum Chip in the computer will provide subterranean access to the irradiated vault.

Down the stairs one will encounter a hostile protectron, a door, and the rest of the path. Behind the door one will find three computers, two of which are locked. The difficulty of the locked computers are average and hard respectively, once hacked they can be used to disable the vault's defenses. The average difficulty computer disables the automated turrets, while the hard difficulty computer disables the protectrons. The terminal controlling the sentry bots is broken, and cannot be used. If one is able to hack both, the player character's path is clear, for now.

Head down the hall. If the player character's Repair skill is 60, they can open the door on the right and disable the sentry bots to prevent them from becoming hostile. In the next room, one will encounter two turrets and two protectrons.

The next room is protected by four protectrons. If the player character plans on following Caesar's orders, destroy the three generators located in this room by shooting them. Once they're destroyed, the facility will destabilize and radiation will be released. This option will set off the facility's security system, which at this point should only consist of four sentry bots, unless the player character chose to disable or destroy them.

Regardless of one's choice, the player character will receive 500 XP and the objectives will update. Return to Caesar for Legion Fame and 100 XP.

Note: If House was killed previously (such as for installing Yes Man onto the Lucky 38's mainframe), this part of the quest will be skipped.

Caesar wants the Courier to get the Boomers to use their artillery cannons against the NCR when he attacks Hoover Dam. However, the problem lies in that the cannons blast anyone that gets close to their base (if the player character is already idolized with them then this section can be skipped). While heading to their base, George will stop the player character and offer information on how to get past the shells. One can use a Speech check or pay him, but all it boils down to taking a left turn as soon as one sees the houses and following the house line until one reaches the end

Make a beeline for the fence, and once one is close enough, enter the gate. Talk to the Boomers and follow directions until one completes the Boomer questline (see the Volare! article for more details) and have support from the tribe. After all this return to Caesar and let him know that the Boomers are on his side.

Main article: Beyond the Beef

The player character must bring Caesar's offer of allegiance to the White Glove Society. After learning about the society by talking to Marjorie and Mortimer, one can either tell Caesar they do not want his alliance (which ends this part of the quest) or go to Mortimer after talking to Marjorie and help revert the society to cannibalism (see Beyond the Beef). Once the mission has been completed by either reverting them to cannibals or not, return to Caesar.

Once the player character reports to Caesar, Don't Tread on the Bear! will fail and the NCR will become permanently hostile. Since the NCR controls many places, it will result in loss of quests, merchants, and repairmen. One should prepare themselves before reporting to Caesar.

Main article: Still in the Dark

The Brotherhood will confiscate the player character's weapons, so it is recommended to carry some holdout weapons before entering. From here, one can decide to destroy the bunker entirely or just kill all the Brotherhood of Steel personnel in and around the bunker. To destroy the bunker, the player character will need 100 Science to destruct the bunker from the terminal. If one does not have 100 science, one will need to obtain keycards from Edgar Hardin, Lars Taggart and Nolan McNamara by either killing or pickpocketing them. Once the player character has all the keycards, use the terminal next to the Self-Destruct terminal, generate the self-destruct password, go to the Self-Destruct terminal and begin the bunker self-destruct sequence.

There is not an option to let them live. Once completed, return to Caesar.

Caesar will now explain that he suffers from painful headaches, caused by a tumor in his brain, and tells the player character he needs them to find a cure. One can either choose to find the cure, attempt surgery themself (which may or may not kill him depending on the player character's Medicine skill level or Luck), or get help from Arcade Gannon to cure Caesar. Be warned; what happens in this quest will greatly affect the ending of the game.

Report to Legate Lanius, where the player character will be teleported to the Legate's camp automatically. The second battle for Hoover Dam will begin.

The name of this quest refers to a Gospel story in which Jesus is asked whether or not the Jews should have to pay taxes to their Roman rulers. Jesus responds by asking whose image is on the denarius. His challenger replies "Caesar's," thus admitting that the Jews are, after all, using Roman money. Jesus then instructs the crowd to "render unto Caesar what is Caesar's and unto God what is God's."

Retrieved from "https://fallout.fandom.com/wiki/Render_Unto_Caesar?oldid=3496270"
Community content is available under CC-BY-SA unless otherwise noted.