Fallout: New Vegas
“I'm intrigued, so I'll go to this reunion. I'll be handing things over to Calamity, so talk to her if anything comes up. Oh, you'll need my word from the pass phrase to get into the bunker - "friends." Don't forget it.”

The Remnants bunker is a small Enclave outpost in the Mojave Wasteland in 2281. It formerly served as a Vertibird refueling station. It is located near Ranger Station Foxtrot, due east of Jacobstown, the entrance of which leads to Pine Ravines pathway.

Sometime after the destruction of the oil rig, the New California Republic sacked Navarro, spreading the Enclave across the wasteland. Some members of the Enclave took refuge in the bunker, while others integrated into other towns and settlements. According to Judah Kreger, the bunker is an old Enclave vertibird refueling station. The station was placed on standby mode decades ago, and is in good working condition despite the time that has passed.[1]

The bunker is sealed by a password that can only be obtained through Arcade Gannon's companion quest, For Auld Lang Syne. After speaking to the five members of the Enclave remnants, the Courier will have collected the words necessary to make the password "dear old friends, remember Navarro" in order to enter. This is one of, if not the only, fully functional Enclave installation in the Mojave Wasteland.

The layout of the bunker is similar to the Hidden Valley bunker, itself modeled on the interior of Raven Rock. The design is very linear. The entrance leads to a staircase, which opens into a small hangar. There is an Enclave vertibird, six suits of Enclave power armor, each individually protected by forcefields (and thus impossible to take), several armor and weapons lockers by the power armor (only one of which has loot in it), and a pair of crates near the back. All of the items are considered owned, but there is no Karma penalty for stealing them.

Beyond the hangar is a small planning room, where the Remnants will have gathered to decide which faction they should aid in the upcoming battle. Beyond the entrance to the north is a hollowed-out rock with random loot.

The Remnants bunker appears only in Fallout: New Vegas. 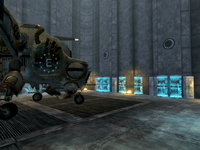 The bunker's interior with vertibird