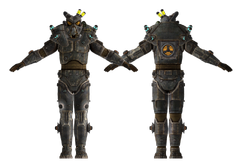 The Remnants Tesla armor is a piece of power armor which was cut from the final version of Fallout: New Vegas. Only the unique variant, Gannon family Tesla armor, is available to the player.

Given their non-appearance during the events of Fallout 2 between 2241 and 2242 and its greater rarity and less resistance compared to the advanced power armor, it was possibly a prototype during this period before the complete destruction of Navarro by the NCR.

Similar to the Enclave Tesla armor from Fallout 3, the Remnants Tesla armor has multiple energy capacitors on the shoulders and provides an Energy Weapons skill bonus. 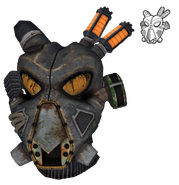