Fallout 3
“My family and I, have taken refuge, in a drainage chamber, not too far from a... radio relay tower, outside of D.C.”— Bob Anderstein

Relay tower KX-B8-11 is located northeast in the Capital Wasteland in 2277. After turning its power source on, it broadcasts Signal Oscar Zulu to the near vicinity.

The tower stands about 40 feet in height and is surrounded by a fence. The signal repeats a message from Bob Anderstein that says he has taken shelter in a nearby drainage culvert with his wife and his son. He also says that his son is very sick and needs medical attention, he pleads for anyone that hears his message to help.

If the Lone Wanderer walks just a bit to the southeast of the relay tower, downhill near a few rocky outcrops they will see the end of the metal drainage pipe. Enter, and at the end of the tunnel, they will find two doors. The one on the right contains the long-dead bodies of Mr. Anderstein and his wife, but no son. There are a lunchbox, first aid box, and some other random supplies. The opposite side of the tunnel contains the ham radio that is broadcasting the signal. 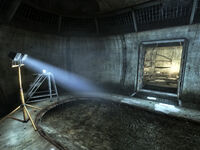