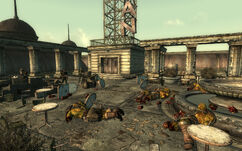 Reilly's squad on top of the Statesman Hotel

Ranger battle armor
or Eugene
Access to the Ranger compound

“Get the Rangers home. Please. That's all I want. I don't care how you do it.”— Reilly.

Reilly's Rangers is a side quest in Fallout 3. It is also an Xbox 360 and PC achievement as well as a PS3 trophy.

This quest can be started by:

WARNING: If all the stranded rangers die for any reason, it will have serious consequences on the outcome of the quest. See the Notes section for more information.

The official quest reward is either a suit of Ranger battle armor or the unique minigun, Eugene, and the Lone Wanderer also becomes a member of Reilly's Rangers.

Note: if all the Rangers die during this quest, one will not be able to start Geomapping with Reilly. Attempting to initiate dialogue with her will fail.

After rescuing Reilly's Rangers, if one offers to help Reilly with the Rangers' mapping duties, she will give the player a geomapper module. As long as one has the module in their inventory, it will record every new location one discovers. Return to the compound periodically and speak to Reilly again to receive 30 caps per location. One can speak to her right away after first receiving the module and get paid for locations the player has already discovered.

There may be a minor glitch upon talking to Reilly about the geomapping. She may say that all the locations one has mapped before receiving the module were already found, and that one needs to find "new" locations to receive any payment. This can be avoided by not trying to 'cash in' right away; leave the compound and discover at least one location, then return to Reilly, and one will be paid for every location on their map.

It is not enough to simply have the locations on ones Pip-Boy map (as can be gained from the Explorer perk or from Karen Schenzy after the Blood Ties quest). To gain the caps these locations have to be "discovered" by actually visiting them.

Two of the Rangers (provided they survive) also offer services: