Fallout 3
“We're guns for hire; the best merc group in the Capital Wasteland. If you need something done in there, you seek us out.”— Reilly, describing Reilly's Rangers

Reilly's Rangers is a mercenary faction in the Capital Wasteland, based at the Ranger compound near Seward Square. As of 2277, there are four members of Reilly's Rangers.

While a mercenary force, Reilly's Rangers are somewhat altruistic and operate according to a strict set of morals. They hold contempt for Talon Company, a mercenary group with no such convictions, which they have had run-ins before.

Luck seems to be a major theme with regards to Reilly's Rangers. The group's emblem prominently features a four-leaf clover and luck is often mentioned in the various conversations you can have with the group's members (i.e. Butcher, Donovan, and Brick all credit their survival against the super mutant army at the Statesman Hotel as mostly due to luck). In addition, their Ranger battle armor, grants a +1 stat boost to Luck. 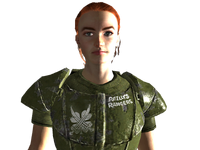