EyebrowF
“Thanks. You're sweet to try and make me feel better about everything. I just hope that I can get back to mapping the ruins soon. I have a lot of contacts that are demanding I finish.”

Reilly is the leader of a small mercenary band known as Reilly's Rangers in 2277.

Reilly, who is 30 in 2277, grew up without her parents in Washington, D.C., raised instead by a military man who brought her up to be self-sufficient. Her adoptive parent died 12 years later and Reilly carried him to Arlington Cemetery for a proper military burial. At the age of 26, she founded a group dedicated mapping the Capital Wasteland called Reilly's Rangers.[Non-canon 1] She has worked with the members of Reilly's Rangers for years, and trusts all of them with her life.[1]

* Only when she is in Underworld. 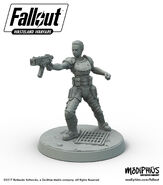 Reilly in her own Ranger combat armor