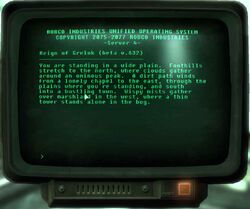 Reign of Grelok is a mini text adventure game that can be played on a terminal in Hubris Comics and was programmed by the Hubris Software division. It follows classic text adventure conventions with commands like "Inventory", "Go North" etc. It is only a few pages long, and there is no reward for completing it.

From the open field where you begin, there are four areas. A mountain to the North, a swamp to the West, a village to the South, and a church to the East. You begin with a rusty sword in your inventory, and also a drinking flask.

To complete the adventure, you must first go North and look around. You will see a gem in a crag, and afterwards you must pick it up.

From here, go back to the open field (South) and West to the swamp. Look around, and afterwards speak to the wizard. This causes the gem to be split into two parts: one to improve your "Rusty Sword", and the other to pay for the work.

Go back to the open field (East), and this time go South to the village. Look around, and speak to the blacksmith. He'll improve your sword, turning it into "Magical Sword". Before you leave, speak to the priest for a side mission to the chapel.

Again, back to the open field (North), and East to the chapel. Look around, and use your sword on the zombie. You will have to examine the grave to take the zombie's head as a trophy.

Go West and South to return to the village, speak to the priest, and he will give you a key to his church. This allows you access to the holy water to fill your flask. (You do not need this to complete the quest, however.)

Finally, go West and then North to the mountain, where you can use your magical sword on Grelok. You are treated to a brief dialogue of his death and your victory over evil.

The game contains a glitch (something not unexpected of a beta-version game). If you speak to the wizard after the magic sword has been forged, he will repeat the dialogue about returning with the magic gem, and will give you the two halves again. The blacksmith can then be made to forge a new magic sword, though you will still only have one in your inventory. This can be repeated as many times as the player likes, and has no effect on completing the game.

This pays homage to the text-based adventure games popular in the 1980s on various personal computers, which still enjoy a small but active cult following today. They use text-only parsers, where the user types in commands to perform actions. Many were extensive in scale, requiring the user to create detailed 'pen and paper' maps. The best known were published by Infocom: the Zork series, Planetfall, and Hitchhiker's Guide to the Galaxy.

Retrieved from "https://fallout.fandom.com/wiki/Reign_of_Grelok?oldid=3070200"
Community content is available under CC-BY-SA unless otherwise noted.