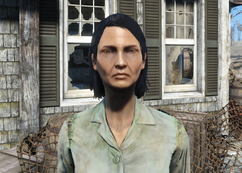 Close to Home
Far From Home

“My daughter is strong. Focused, careful. That's how I know she's still alive.”

Rei Nakano is the matriarch of the Nakano family, living in their residence on the northeastern shore of the Commonwealth in 2287.

Rei is the wife of Kenji Nakano and the mother of Kasumi Nakano. She and her family began fighting more following the death of Taichi Nakano. She became concerned that she was growing apart from her daughter, who spent most of her time in the old boathouse.[1] When Kasumi leaves for Acadia without a trace, Rei is more optimistic about the situation, believing that she may have left home to become her own woman. Although she would like to know that Kasumi is safe, Rei realizes that Kasumi is nineteen years old, and is capable of handling herself in the real world.[2] In contrast, her husband is paranoid and believes she has been taken by kidnappers, which Rei sees as another example of him being overprotective, as if Kasumi is still in diapers.[3] Rei fully believes that her daughter is alive, though she still wants to know why she left without saying anything.[4]

Depending on how the conflict on the Island is resolved, the Nakanos' missing person investigation may conclude in several different ways: Kasumi is dead, at which Rei will express great remorse;[5] or Kasumi decides to stay in Acadia, and the Nakanos can be told that she is or isn't a synth. If they are told she is human, but staying in Acadia because of the people she cares about there, Rei will be glad she is safe and has a place where she can make her own future.[6] If Kasumi returns home safely, Rei's reaction will differ depending on whether or not Kasumi believes that she is a synth. If Kasumi believes that she is a synth, Rei will attempt to help the Sole Survivor's case if they try to convince Kenji that he should accept her anyway. Rei believes that, even if Kasumi has been replaced by a synth, they should salvage what they can from such a terrible world.[7] If Kenji kicks Kasumi out of the house, having failed to be convinced, she will express shock that her husband could be so cruel.[8] If Kasumi realizes that she was human after all, Rei will be happy and relieved to have her home and extremely grateful to Nick Valentine and the Sole Survivor.[9] She will reaffirm to Kasumi that she is flesh and blood.[10]

Rei Nakano appears only in the Fallout 4 add-on Far Harbor.

Retrieved from "https://fallout.fandom.com/wiki/Rei_Nakano?oldid=3253481"
Community content is available under CC-BY-SA unless otherwise noted.