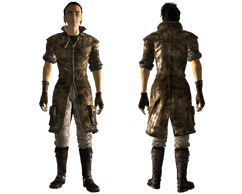 The Regulator duster is a piece of clothing in Fallout 3.

The duster outfit seems to consist of a black undershirt and a pair of gray canvas pants underneath a long, brown leather overcoat with the sleeves rolled up above the elbow, a pair of leather gloves on the character's hands, and a pair of motorcycle boots for footwear.

It can be repaired with other Regulator dusters and provides a Damage Resistance of 10 as well as a bonus of 1 to Charisma and a bonus of 5 to Small Guns.