Fallout 3
“Oh no, we're spread all around. The few here just assist me in organizing things here at the headquarters.

The Regulator HQ is housed within a farmhouse in the Capital Wasteland, and is specifically located north of the Wheaton armory, and west of Canterbury Commons.

The coordinates for this location are only discerned once the Lawbringer perk has been taken, with it being impossible to get inside without said perk as the door will be locked and will require a key. The map marker for the Regulator HQ will also not appear without the perk.

Inside the Regulator HQ, three Regulators can be found along with Sonora Cruz, who will pay for any fingers retrieved from the dead bodies of evil non-player characters. The bounty is normally five caps per finger, but those with a very good Karma rating (above 750) will receive ten caps instead. Outside of the HQ, are four brahmin, which can sometimes be seen being tended to by Sonora, or wandering aimlessly.

The Regulator HQ appears only in Fallout 3. 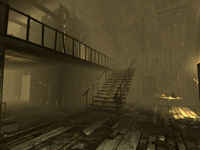