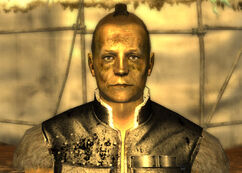 Oh My Papa
We Are Legion

Regis is a Great Khan living in the Red Rock Canyon in 2281.

Regis thinks of himself as the Papa Khan's right hand man. This is also literal, as Regis takes the seat to Papa's right in the Long House. Regis is also the Great Khan's law enforcer and as such will warn the Courier to watch their step. Although loyal to Papa, Regis harbors doubts about his leader's recent decisions, especially his newfound friendship with the Legion.

Jack describes him as "Cool. Scary, but cool."

He is one of the few named characters affected by the Sneering Imperialist perk.

Retrieved from "https://fallout.fandom.com/wiki/Regis?oldid=3205195"
Community content is available under CC-BY-SA unless otherwise noted.