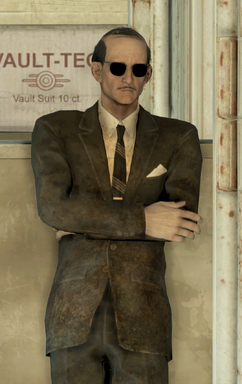 Reginald "Regs" Stone is a member of the Secret Service in Appalachia in 2103.

Reginald was a Secret Service member in Vault 79, although he was never field agent material, like Mercedes Stern and Cole Carver; however, he is an accomplished requisition officer, as he is highly strict with rules (his nickname Regs, short for both "Reginald" and "regulations" reflects this).[1] Even after two years inside Vault 79, Reginald made sure that all the gold was stored and accounted for.[2] After the failed mutiny of Shorty, he started reading more often, mostly old manuals.[3] He was also the one who helped Mercedes give birth to Maggie Stern.[4]

However, Reginald now faces a new problem. He and others are trapped in a small, under-supplied area after the vault's reactor malfunctioned, releasing feral ghouls and rogue security robots. He now awaits an unlikely rescue.[5]

Regs sells unique plans for armors and weapons such as the plasma caster and T-65 power armor. He only trades in

Reginald "Regs" Stone appears only in Fallout 76, introduced in the Wastelanders update.

Retrieved from "https://fallout.fandom.com/wiki/Reginald_Stone?oldid=3422340"
Community content is available under CC-BY-SA unless otherwise noted.