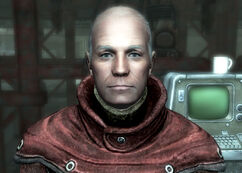 Picking Up the Trail
Death From Above

“You share your father's determination, it seems. And in this case, you are correct. There may well be another way. Vault 87 is located very close to the site of Lamplight Caverns. It is entirely probable that the Vault may be entered from within the caves.”

Reginald Rothchild[1] is the head scribe of the Brotherhood of Steel in 2277.

Head scribe Rothchild is in charge of the scribes of Capital Wasteland Brotherhood of Steel,[2] with a professional, focused personality. He is fully dedicated to the Brotherhood's ideals and its chain of command,[3] and greatly respects men of science and knowledge.[4] He is an accomplished expert in several areas of science, including robotics[2] and cybernetics, allowing him to save Star Paladin Cross' life after what seemed to be a mortal injury.[1][5]

Despite that, Rothchild was a part of Star Paladin Owyn Lyons' expedition to Washington, D.C. in 2255.[6] With the discovery of Liberty Prime, Rothchild was tasked with bringing the massive weapon of war online.[7] Although he led his own team of talented scribes, he also interacted with a number of scientific minds from across the wasteland, including James of Project Purity. He developed a healthy respect for him and his independent team, even if the project fizzled out without producing any results.[8] After all, James was a visionary and these were in short supply.[4]

Unfortunately, success proved elusive in his own project as well. Despite intense efforts, Rothchild and the rest of his team failed to reactivate Liberty Prime for over twenty years. As he worked on Liberty Prime, he observed the steady deterioration of the chapter under Lyons' leadership and the changes introduced to their mission.[9][10] He watched as their forces dwindled, wasted on ineffectual attempts to destroy the super mutants, against all orders from the western elders. As Lyons' confidante, he voiced his concerns about violating orders repeatedly, but his words fell on deaf ears.[3] However, he stayed with the elder out of a sense of personal loyalty and the belief that technology stockpiled at the Citadel would benefit the Brotherhood.[11] However, he's not a meek sycophant and does not hesitate to speak his mind to the elder, even if Owyn might not like what Reginald has to say.[12] Especially after Lyons' insubordination led to the West cutting the D.C. bunker loose, denying them reinforcements and shutting off communications,[13] and his obstinacy alienated the Outcasts, making them leave in 2276.[14] Regardless, the two remain on a first name basis even among peers.[15]

In this situation, the conflict with the Enclave seemed like a death knell for the chapter. However, with the arrival of Madison Li, Rothchild decided to continue his work in a last-ditch attempt at reactivating Liberty Prime.[16] This turned out to be a wise decision, as Li's experience with accelerated vector fusion allowed the Brotherhood scribes to jury-rig a powerful, but compact fusion plant that managed to provide enough power for the robot's primary systems. With it, the Brotherhood was able to achieve victory over the Enclave's forces at the purifier, countering their air superiority and smashing through fortifications surrounding the purifier. With the energy management issues out of the way thanks to Dr. Li's assistance, Liberty Prime became the trump card in the war against the Enclave.[17]

As such, when the Enclave finally managed to destroy Liberty Prime by luring him to their satellite relay station in Rockland, Rothchild was heartbroken. The loss set the chapter back years and removed their only significant advantage over the Enclave, which remained a potent threat even with the loss of the purifier and Raven Rock.[18] As the Brotherhood recovered from this setback, Rothchild focused on finding new methods of countering their military superiority: Intelligence, decryption, and improvising new weapons for use in the field.[19][20][21][22][23]

After the fall of Adams AFB, Rothchild returned to his roots, starting work on rebuilding Liberty Prime. Although the task was daunting, requiring immense amounts of salvage to restore its complex systems, especially electrical components and optics, he rose to the challenge.[24] Apart from laying the groundwork for restoring Liberty Prime,[25] a task that would not be completed until 2287, 400 miles away from the Citadel under the command of Proctor Ingram, Rothchild also led reverse-engineering projects trying to harness the potential of Enclave technology recovered from Adams AFB, so that the Brotherhood could stay one step ahead of its enemies in the wasteland.[26][27][28]

He can usually be found in the Citadel laboratory.

Reginald Rothchild appears in Fallout 3, its add on Broken Steel and Fallout Shelter.

Retrieved from "https://fallout.fandom.com/wiki/Reginald_Rothchild?oldid=3461559"
Community content is available under CC-BY-SA unless otherwise noted.