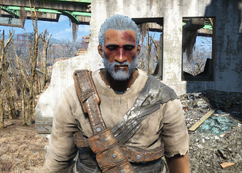 Regi Blattaria is a hostile man living in the Commonwealth in 2287.

Regi Blattaria appears only in Fallout 4.

His roach army, and the fact that his name roughly translates to King Roach (Regi from Regis, while Blattaria is the Latin name for cockroach) while he is carrying a minigun all imply he is a reference to the Roach King from Fallout 3. There is even a toy rocket reminiscent of the Roach King's throne on a shelf near his spawn point. To support this, within the game's code his editor ID is POIRoachKing.

Retrieved from "https://fallout.fandom.com/wiki/Regi_Blattaria?oldid=3363559"
Community content is available under CC-BY-SA unless otherwise noted.