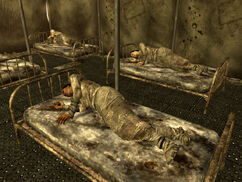 Refugees in the Aerotech tent

“I don't know a thing about no missing refugees from that Aerotech camp. Go cry to somebody else.”— Saint James

The refugees of the Mojave Wasteland are either one of two categories, those displaced by Caesar's Legion[1] and those NCR citizens and nationals, and other travelers who ventured to New Vegas to strike it rich, only to become completely destitute.[2]

Those refugees of the NCR-Legion War have mostly been gathered at the refugee camp at Bitter Springs. While NCR personnel try their best to care for their charges they are chronically under supplied and understaffed. To make matters worse, their camp has been terrorized by an unknown assailant, which the local NCR officers have determined as living in the nearby mountains. Over the past six months, eight refugees and three soldiers have been killed.[3]

In contrast to the war refugees, those at Aerotech Office Park are those NCR citizens and nationals, and other travelers who ventured to New Vegas to seek their fortune, only to become completely destitute.[2] Some try to find honest work in Vegas to make enough money back to move on, but most remain stuck in a perpetual cycle of hopelessness, exploited by crooked merchants taking what little they have through crooked gambling or selling liquor.[4][5]

Even here the efforts of the NCR Army is only enough to keep the people from dying. The shortage of personnel makes it impossible for Captain Parker, the head of the camp, to protect everyone. Some people have gone missing without a trace, while one of the local crooks, Keith, had the gall to set up in one of the suites with a rigged gambling ring.[6] The Followers lend a hand through Bert Gunnarsson, but the Mormon ghoul mostly ministers to those trapped at aerotech, unable to change the situation on his own.[6][7]

These refugees appear only in Fallout: New Vegas.

Retrieved from "https://fallout.fandom.com/wiki/Refugee_(Fallout:_New_Vegas)?oldid=3178604"
Community content is available under CC-BY-SA unless otherwise noted.