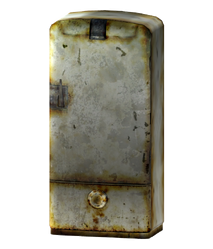 “A refrigerator. Out of coolant.”— Fallout in-game description

The refrigerator is a container that stores food and drinks at cool temperatures, in order to increase their longevity.

They can typically be found in kitchens, where they can be looted for food and, occasionally, single regular bottles of Nuka-Cola. Certain refrigerators also serve as liquor cabinets and will contain various bottles of alcoholic drinks such as whiskey, wine, and vodka.

The refrigerators in Andale do not contain regular food, but instead, they have strange meat.

In the Nuka-Cola plant there are unique refrigerators called Nuka-Cola fridges, but these are all empty. One of these can also be found in Sierra Petrovita's home in Girdershade, but it is locked and requires console commands in order to be opened.

An Easter egg refrigerator can be found in Fallout: New Vegas. If the Courier has the Wild Wasteland trait, there is a skeleton in a fridge, wearing a suave gambler hat. This is referencing the film Indiana Jones and The Kingdom of the Crystal Skull where Indiana Jones hides in a lead-lined fridge to survive a nuclear blast.

Refrigerators can also be found in homes in Fallout: New Vegas, and may contain additional food items than those listed above, such as Sunset Sarsaparillas and atomic cocktails.

Refrigerators return, but unlike the previous Fallout games, many of them cannot be used as storage. There is also a quest where the Sole Survivor must rescue a ghoulified boy from a refrigerator and return him to his parents near Quincy. Much like the New Vegas one, it references Indiana Jones and The Kingdom of the Crystal Skull. 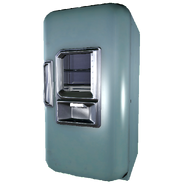 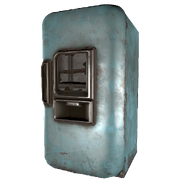 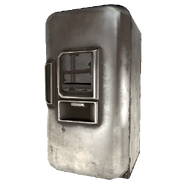 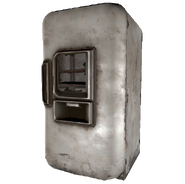 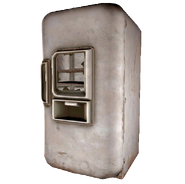 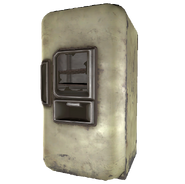 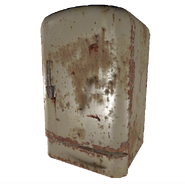 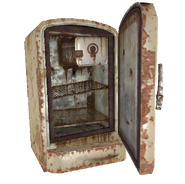 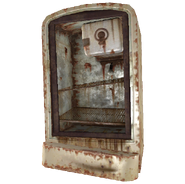 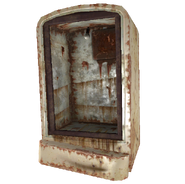 Add an image to this gallery
Retrieved from "https://fallout.fandom.com/wiki/Refrigerator?oldid=3235527"
Community content is available under CC-BY-SA unless otherwise noted.