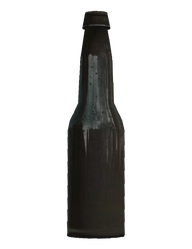 A refreshing beverage is a consumable item in Fallout 4.

A mysterious panacea made from medical supplies, this chemical concoction can heal all wounds and flush out radiation. Furthermore, it can cure any ongoing addiction, as long as one does not have any active effects from chems at the point of consumption.

The refreshing beverage seems to be just a normal brown glass beer bottle with no label. Despite its mundane appearance, it is one of the most powerful healing items in the game. It heals a massive 500 hit points, removes 1000 rads, and cures all addictions, making it equivalent to five portions of bloodbug steak, four doses of RadAway (without the Medic perk) and one dose of Addictol.

In addition to its powerful effects, it is made of easily acquirable ingredients and does not require any perks to craft.

Since the refreshing beverage heals over a short period of time (albeit very quickly) it essentially gives immunity to damage for a few seconds.

It can be crafted at any chemistry station. It also can be found in a milk machine near the campus law offices In Cambridge.

In Survival mode, several changes have been made to the effects of the drink on the player character. Firstly the rad reduction has been reduced to 100 but the effects still remain immediate. Health restoration has also been reduced. Furthermore, the Chemist perk is required to produce the item.

A single bottle drink will reduce the player character's dehydration. For example, if one is mildly dehydrated, consumption will restore them to hydrated.

The refreshing beverage has less value than the sum of its ingredients.

Retrieved from "https://fallout.fandom.com/wiki/Refreshing_beverage?oldid=3183136"
Community content is available under CC-BY-SA unless otherwise noted.