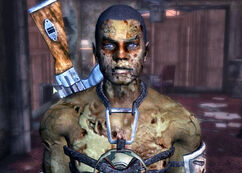 “I already fought my way outta there once. There ain't no force in The Pitt that could make me go back there again. Not you, not Ashur, not anything. Got it?”

Although loyal to Ashur (almost to a fault), Reddup is overzealous when it comes to administering punishment on supposed misdemeanors and crimes perpetrated by Pitt slaves. Seething with rage, he does not think twice about executing those he deems to have wronged him, and he has a special type of rage reserved for the subhuman trogs. He regularly snipes at any trog incursions with whooping glee.[1]

Reddup is a former slave who fought his way up through the arena. He is one of only three non-player characters to have achieved this; the others being Gruber and Squill.

Reddup appears only in the Fallout 3 add-on The Pitt.

Reddup shares his name with a Western Pennsylvania expression, "redd up", meaning "tidy up" or "clean up".

Retrieved from "https://fallout.fandom.com/wiki/Reddup?oldid=3440047"
Community content is available under CC-BY-SA unless otherwise noted.