Find out who cut the whore
Find the excavator chip 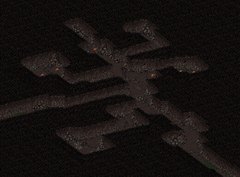 The tunnels below the mining camp

Redding mining camp is in the downtown section of Redding.

The mining camp is divided into several parts, like the Morningstar mine/Kokoweef mine HQ, the caravan tents, the Last Gasp Saloon, and the Mole Rat Mambo fighting contest. The Kokoweef and Morningstar mines both seek the excavator chip so that they eventually can beat the other mine.

The Redding mining camp appears only in Fallout 2.

The mines within the Redding mining camp are based on the real world Morning Star and Kokoweef mines in the Ivanpah Mountains of the Mojave Desert. The mines are on opposite sides of Kokoweef Peak, about 5 miles (8 km) apart. 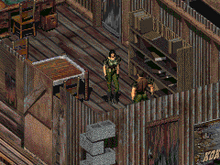 Scout Handbook
Add a photo to this gallery
Retrieved from "https://fallout.fandom.com/wiki/Redding_mining_camp?oldid=3379826"
Community content is available under CC-BY-SA unless otherwise noted.