Play sound
Gold_Slouch_Redding.ogg
“And you thought mutants were diseased.”— Marcus

Redding is a mining town located southeast of the Den.

The center of gold mining, several larger political factions have lobbied for control of Redding to gain dominance in the gold trade. It is locked in the center of a power play between the three major power players of the NCR, New Reno, and Vault City.[Non-canon 1]

Marge LeBarge the owner of the Kokoweef Mine supports merging with the NCR. The Morningstar Mine run by "Dangerous" Dan McGrew is in favor of an alliance with New Reno. The third option is Vault City, advocated by "Painless" Doc Johnson. The Van Graffs are from the location and many people own ranches, such as Chief Hanlon and the Jamisons,[1][2][3]

The town is a collection of wooden buildings. The police force is small, relying on the Sheriff's charisma to maintain peace and order. There are two major mining companies in Redding, as well as a saloon and a doctor. The mayor of Redding, Ascorti, runs an establishment called Ascorti's Ace casino. Redding is home to hundreds of citizens, governed by a mayor and town council.[4] The town also offers the Malamute Saloon, Ascorti's Ace and City Hall run by the town's mayor, and a clinic run by Doc Johnson. The primary source of income for the town is raw materials excavated by Kokoweef and Morningstar mines, primarily gold.[5]

The busiest and most populated part of Redding; pick your poison. The Malamute Saloon offers whoring, drinks, and a place to sleep (not recommended for light sleepers). Ascorti runs Ascorti's Ace and City Hall where you can gamble hard-earned caps away. There is law in Redding; out-of-towners and trouble-makers are kept in line by Sheriff Marion, who runs the city jail. If a night in the slammer isn't good enough for you, a visit to Painless Doc Johnson's should keep you in line.

The Great wanamingo mine is one of the gold mines in Redding. By 2241, it became inactive thanks to being infested with the alien-like wanamingos. Mayor Ascorti tries to coerce newcomers to Redding into buying a deed to the mine billing it as a great investment, $1000 for the richest mine in the town. In order to make any profit from the deed, some eradication is required.

Numerous entrances to the mine exist, including one inside a ripped-open grave. Travel within the mine is extremely precarious, as the wanamingos have extraordinary senses of perception and can detect intruders even through the walls of the mine, rushing in quickly to dispose of any interlopers.

The wanamingo mine has two levels and is rumored to contain explosives as well as special electronic chips within the rusting hulks of the mining machinery. The Morton brothers and their gang can be found here following the acceptance of the quest Kill Frog Morton from Sheriff Marion.

The Redding tunnels are a series of tunnels under Redding and are infested with rats and wanamingos. The tunnels are connected to the great wanamingo mine and other locations, like the Malamute Saloon, and Ascorti's Ace and City Hall. 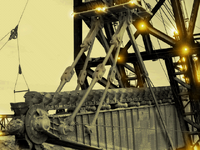 Mining equipment from Redding in the endings 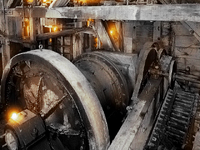